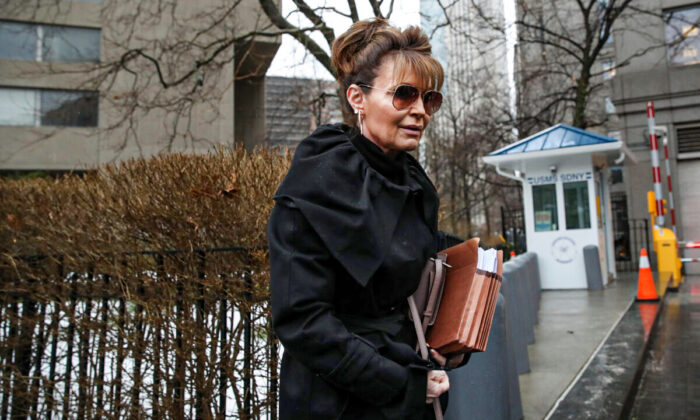 Former Alaska Gov. Sarah Palin arrives at a federal court in Manhattan to resume a case against the New York Times after it was postponed because she tested positive for COVID-19 in New York City on Feb. 3, 2022. (Spencer Platt/Getty Images)
US News

NEW YORK—Former Alaska Gov. Sarah Palin spent her 58th birthday listening to a closing argument by one of her attorneys, as well as one from the defense, in her defamation trial against The New York Times on Feb. 11.

As a public figure, Palin, a Republican, “suffered plenty of jokes, plenty of insults” and “slings and arrows,” but with the newspaper’s editorial linking her to a mass shooting, “it became time to draw the line” with a lawsuit, her lawyer, Kenneth Turkel, said.

“Ultimately, civil lawsuits are about money, but that’s not why we’re here,” he said.

Turkel reviewed many of The New York Times’ internal emails that had been submitted as evidence, showing the biased genesis of the editorial.

He looked at the two sentences from the editorial that are in question, which District Judge Jed Rakoff referred to as “challenged statements” later in the day.

Turkel went over the four elements he and Palin’s other lawyer, Shane Vogt, need to prove, and explained how they’ve succeeded in doing so.

He referred to the Feb. 10 testimony of Hannah Ingber, who worked at the newly formed Reader Center at the newspaper, as a “pin-drop moment” when she testified she wasn’t aware of any policy that prevented reporters or editors from apologizing to subjects of articles.

This contradicted the testimony of former editorial page editor James Bennet, who had the final word on the editorial, who stated that was a policy at the publication.

In defense attorney David Axelrod’s summation, he accused Turkel of cherry-picking portions of emails, “just to show you the bits and pieces he wanted you to see,” and that he “slices and dices” testimony. Axelrod used the words “honest mistake” several times, referring to the challenged statements.

“There was no conspiracy here to defame Governor Palin,” he said. Axelrod used the word “conspiracy” again a few minutes later.

Things got heated between Axelrod and Turkel when Turkel made two objections near the start of Axelrod’s summation. Axelrod accused him of “breaking up the flow” of his monologue.

Rakoff stepped in and clearly told Axelrod the objections were legitimate.

Axelrod’s most repeated refrain was “It doesn’t make any sense,” and even borrowed a “Come on, man” from President Joe Biden.

Palin mostly sat still during Axelrod’s summation, but when he twice mentioned “The Masked Singer,” she and Turkel exchanged glances.

Palin turned to look at Axelrod only once.

Axelrod kept shifting the blame to Elizabeth Williamson, the author of the editorial’s first draft, from Bennet.

“The evidence does not support branding Mr. Bennet with a scarlet D for defamation,” he said.

Upon rebuttal, Turkel said, “I never used the word conspiracy once,” and “I don’t have any idea where that came from.”

After Rakoff gave the jury their instructions, they left the courtroom to start deliberations. The jury is expected to continue to deliberate on Feb. 14.