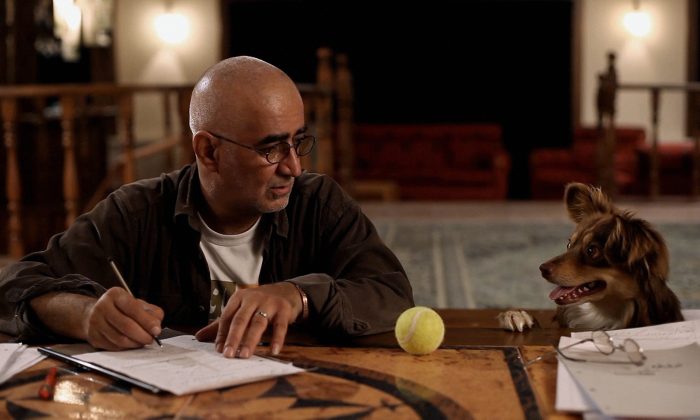 ‘Closed Curtain’: A Screenwriter in Hiding

For most filmmakers of his stature, bringing two films to the international festival circuit over the last three years would be considered reasonably prolific. For Jafar Panahi, who was sentenced to a 20-year filmmaking ban by the Islamist Iranian government, it is quite extraordinary.

Panahi has been awarded the Camera d’Or at Cannes, the Silver Bear for Best Director at Berlin, and the Sakharov Prize for Freedom of Thought. Although he was not allowed to return to Berlin this year, he added to his list of accolades the Silver Bear for Best Script with his latest film, “Closed Curtain,” co-directed by lead actor Kambuzia Partovi.

A man arrives in a fashionable villa on the Caspian Sea. The views are spectacular, but he immediately hangs heavy black fabric over the gauzy curtains, completely sealing the house off from the outside world’s prying eyes.

As a screenwriter and a dog owner, he has two strikes going against him. Initially, he seems most concerned about Boy, his four-legged companion. The state just renewed its campaign against “unclean” “anti-Muslim” dogs, so the television news is filled with grisly images of secret pets that have been rounded up and killed by the police. Yet, the screenwriter seems to carry his own distinctly personal secrets as well.

After shaving his head to alter his appearance, the man settles in to write his screenplay. Much to his shock, his refuge is interrupted by a young man and his suicidal sister. They claim they were chased by the police who raided their beach party, but their very presence troubles the screenwriter. Could he have been so negligent that he left the door open as they claim?

Panahi established his reputation with gritty proletarian dramas, filmed out in the real world, at street level. Sadly, films like “The Circle” (written by Partovi) are impossible for Panahi these days, so he has moved inside for intimate works, like his protest documentary “This Is Not a Film” and his latest collaboration with Partovi.

In fact, the first two-thirds of “Curtain” plays like an Iranian Pinter production. As the screenwriter verbally spars with his unexpected guests, darkly unsettling questions emerge. Just how did they breach his house, and if she really is familiar with his case history, just what does that imply?

If viewers were not off-balance enough, Panahi himself walks into the third act, much like Rod Serling. It seems the screenwriter and the sister are his characters. They can observe Panahi tending to his mysteriously damaged beach house, but they cannot interact with him—at least not exactly.

There are pros and cons to the meta-turn that “Curtain” takes. In a way, “Curtain” becomes a fictionalized sequel of sorts to “This Is Not a Film,” picking up on its themes and frustrations.

The same sense of claustrophobia is present in “Curtain,” but it is expressed more acutely. Frankly, the scenes in which the occupants hold their breath as the police scour around the deceptively darkened house are so effective it seems like a bit of a shame to shift away from that micro-story and Partovi’s restrained but deeply powerful performance.

Panahi’s pet iguana Igi might be telegenic in “Not a Film,” but Boy the dog is probably the best animal screen performer of the year.

Still, there is no doubt “Curtain” is a profoundly serious film, expressing the themes of confinement and oppression that hold particularly meaning for Panahi, but also have resonance for a great many Iranian citizens at large. Highly recommended, “Closed Curtain” is screening in New York at Film Forum.