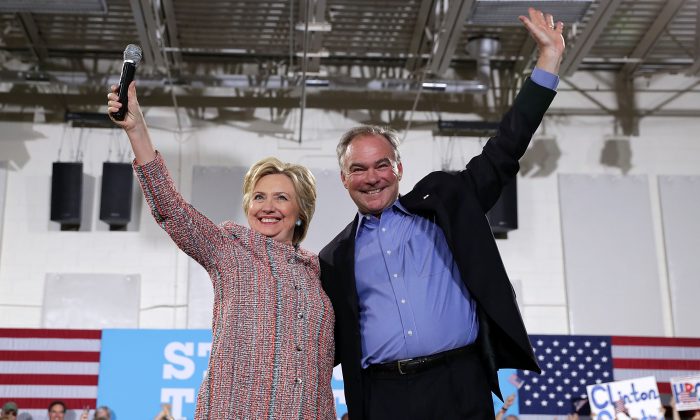 Hillary Clinton has narrowed her Vice Presidential search to two finalists: President Obama’s Agriculture Secretary Tom Vilsack and Senator Tim Kaine of Virginia, according to a report by the Washington Post.

The campaign has been quick to say that they haven’t made a decision and that there are other contenders for the position. Some of the other names being thrown around are Senator Elizabeth Warren of Massachusetts; Senator Cory Booker of New Jersey; Admiral James Stavridis, a former four-star commander of U.S. forces in Europe; and Labor Secretary Thomas Perez.

The frontrunners—Kaine and Vilsack—have gotten praise from Clinton and are in the “top tier” of her choices according to a report by Politico.

Long considered on the shortlist, Kaine is the “safe” choice; a member of the Senate since 2012, he was the Governor of Virginia from 2006 to 2010, and the Democratic Party Chair from 2009 to 2011. He has experience on key committees in congress including the Committee of Armed Services, the Committee on Budget, and the Committee on Foreign Relations.

During his trial run on the campaign trail with Clinton last week in Virginia, Kaine made an appeal to the crowd, asking rhetorical questions like, “Do you want a ‘you’re fired’ president or a ‘you’re hired’ president?”

Vilsack has a similar past as Kaine. A former Governor of Iowa from 1999 to 2007, he had a short lived presidential bid in 2008, which ended when he endorsed Clinton, and was named as the national co-chair of her nomination the same year. He was appointed by President Obama as the Secretary of Agricultural, a post he still holds.

In the 2012 State of the Union, Obama referred to Vilsack as the “designated survivor” of the administration.

Vilsack has profited from having a close personal relationship with Clinton dating back decades before they served four years in the same Cabinet.

When asked by Politico whether or not he’s gone through the vetting process he replied, “has anyone ever answered that question?”

Clinton has expressed a desire to have a Vice President that has national security experience, according to the New York Times. Tim Kaine fits that description, with his experience on the Senate Foreign Relations Committee, as does Admiral James Stavridis.