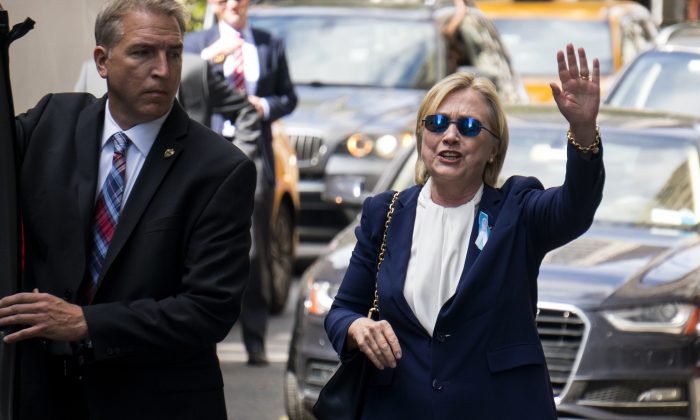 The campaign team of Democratic presidential nominee Hillary Clinton released a letter on Wednesday from her doctor after a health scare at the Sept. 11 memorial.

Dr. Lisa Bardack, chair of internal medicine at CareMount Medical, who had previously written a letter in 2015 on Clinton’s health that was released in August of this year, says the nominee is “healthy and fit to serve as President of the United States.”

Bardack evaluated the former secretary of State on Sept. 2, for a low grade fever, congestion and fatigue. Clinton had a temperature of 99.4 with normal vital signs.

“She was advised to rest, put on a short course of antibiotics and continued on her allergy medications for an upper respiratory tract infection in the setting of her seasonal allergies,” wrote Bardack in the letter. “Over the next several days as she traveled, her congestion worsened and she developed a cough.”

Clinton was evaluated again on Sept. 9, and a non-contrast chest CT scan, including a CTA calcium score, was performed.

“This test allowed for specific imaging of her lungs while also following up on cardiac risk stratification from 2010 given her family history of heart disease,” wrote Bardack. “The results of the CT scan revealed a small right middlelobe pneumonia; her coronary calcium score was again zero.”

Clinton was given antibiotics for a mild non-contagious bacterial pneumonia and was told to rest.

Witnesses Refuse to Testify in Hearing on Clinton’s Email

On Sept. 11, during a memorial event of the 15th anniversary of the terrorist attacks, Clinton “became overheated and dehydrated and as a result felt dizzy,” Bardack said.

“I examined her immediately upon her return home; she was re-hydrating and recovering nicely. I advised her to stay home and rest for the next several days,” wrote the doctor.

“Mrs. Clinton has since been evaluated by me several times and continues to improve,” added Bardack.

Clinton is currently taking Armor Thyroid, Coumadin, Levaquin (for ten days), Clarinex, as well as B12 as needed.

The doctor says Clinton has had “several allergy flares over the past year,” which has been a pattern for most her life. In January, the candidate developed symptoms of sinusitis and an ear infection, which were treated with antibiotics and steroids. In the following weeks she had progressive pain in her left ear, even though she was receiving treatment. An evaluation confirmed that she had a sinus and ear infection, with increased fluid in her left ear.

Clinton then underwent a CT scan evaluation in March, which showed no abnormalities of the brain and mild chronic sinusitis, and continued symptom-free for the next six months.

Bardack wrote that Clinton’s recent testing has been normal and that she remains up to date on all of her immunizations. Her mammogram and breast ultrasound results were also normal, as well as her  thyroid blood tests.

“My overall impression is that Mrs. Clinton has remained healthy and has not developed new medical conditions this year other than a sinus and ear infection and her recently diagnosed pneumonia,” wrote Bardack.

Clinton had received backlash for not being more transparent on her health. She said in interview with CNN earlier this week that she did not announce that she had pneumonia because she “just didn’t think it was going to be that big of deal.”