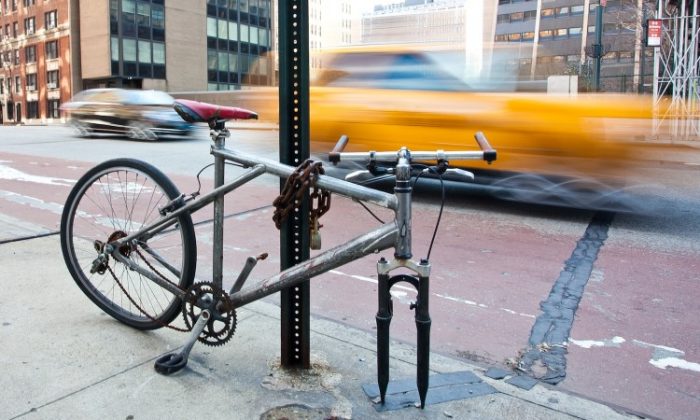 A rusty bike with a bent back tire and missing front tire on 34th Street near 11th Avenue. (Amal Chen/The Epoch Times)
US

NEW YORK—The Department of Sanitation has recently received many complaints about derelict bikes taking up space on the city’s bike racks and creating eyesores.

In October 2010, the Department of Sanitation began cleaning up derelict bikes around the city, including bikes that are crushed and unusable, bikes that are more than 75 percent rusted (including the chains that hold them to public property), or bikes that are missing parts (not including missing front tires or seats which owners sometimes remove to prevent theft).

The rules enacted in 2010 did not, however, include bikes attached to bike racks, only parking meters and other pieces of public property. The Department of Sanitation proposes a change to the rules to include bike racks in response to complaints. It held a public hearing on the proposal on Wednesday.