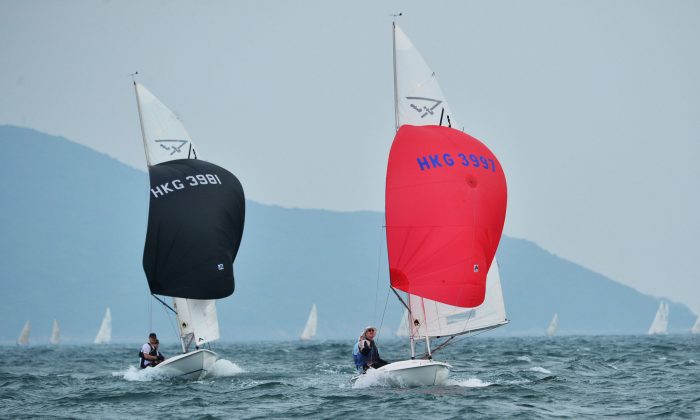 The two leading boats returning back through Lei Yu Mun Gap on the return leg of the HKRNVR race on Saturday May 3, 2014. 3981 (‘Tchaikoffsky’) overtook 3997 (‘Tomffoollery’) to win the race. Howard Williams in ‘Tchaikoffsky’ finished second in the Zerorh+ Top Dog Series behind Jimmy Farquhar’s Etchells 3x11. (Bill Cox/Epoch Times)
International

Flying Fifteens took the first five places in the HKRNVR Memorial Vase, the last race of the 3-race Royal Hong Kong Yacht Club’s Zerorh+ Top Dog Series, held on Saturday May 3. The race that started at Kowloon Bay in Victoria Harbour was a pursuit race to Shek O Rock and back.

Staggered Starts
Boat start times were dependent upon their handicap ratings with Flying Fifteens starting 18 minutes behind Pandora and 8 minutes after the Ruffian class. Impalas started 10 minutes after the Flying Fifteens. Etchells were next off 6 minutes later followed by Magic 25’s 10 minutes later still. Big boats left last with individual starts over a 10-minute period based on handicap.

The Ruffians and Impalas looked quite stunning battling against the conditions producing exotic angles to get maximum benefit from the high winds.

North Easterly winds running at 20 to 30 knots gave challenging sailing conditions and put strain on the boats’ rigging, so much so that Brian Henderson’s Flying Fifteen, “Hong Kong Ffooey” lost a mast and had to be helped back to base.

Two other Flying Fifteen boats (“Fflipping Muppets” and “Ffact or Ffiction”), one Impala (“Pied Piper”) and one Big Boat (“Tornado”) failed to complete the course.

But, generally, it was a good day for sailing and particularly for Flying Fifteens. The smaller craft cut through the water with great gusto even in the demanding conditions on their way to Shek O Rock. On the way back it was fast and exciting sailing.

By the time the first of the 50-plus fleet returned to Lei Yu Mun gap the Flying Fifteens were already in the lead.

At that point Tom Sheppard’s “Tomffoolery” was in the lead, but was closely followed by the eventual winner Howard Williams’ “Tchaikoffsky”—who over took “Tomffoolery” on the run to the line.

“Squiffy” was next through Lei Yu Mun gap, followed by Sam Chan’s “Ffreefire 90”. At this point, the third placed boat in the final standings, Carlyon Knight-Evan’s “Kerfuffle”, was lying fifth.

The leading Ruffian, Nick Bryan’s “Buster” was doing well at Lei Yu Mun, but got pushed into 15th place as the Flying Fifteens and Etchells came rushing past.

The wind was changeable coming out of Lei Yu Mun Gap back into Victoria Harbour and a number of boats got caught out by the abrupt change in conditions. Good Vibrations, Gnu and Lila were all seen floundering, while Also Can was seen traveling some way in the wrong direction before getting things back on track.

In the first 14 places, eight were filled by Flying Fifteens and six by Etchells.

In any pursuit race there will always be questions regarding handicapping, no less so in this race. But certainly in these conditions, and in this length of race, Flying Fifteens and Etchells had the edge.