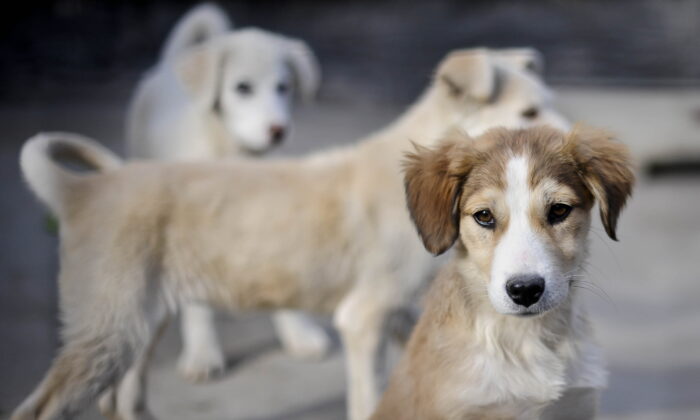 Undated file photo showing Seble, the 8-week-old puppy that had been rescued and was looking to be re-homed at the Nowzad Dogs charity based in Kabul, Afghanistan. (Ben Birchall/PA)
UK

A British Foreign Office minister has denied the claim that Prime Minister Boris Johnson played a role in the airlift of 163 cats and dogs out of Afghanistan, calling the allegation “absurd.”

Zac Goldsmith, Lord Goldsmith of Richmond Park, told the House of Lords on Wednesday that Johnson “had zero role in authorising individual evacuations from Afghanistan during Operation Pitting”—a two-week Royal Air Force Operation to evacuate British nationals and the UK’s Afghan allies out of Kabul after the Afghan capital fell under Taliban control.

It comes a week after Parliament’s Foreign Affairs Committee published leaked emails, including one from an official in Goldsmith’s private office, saying “the PM has just authorised” the rescue of animals and shelter staff to be evacuated on Aug. 25.

Johnson has dismissed the accusation from opposition parties that he lied about his alleged intervention, calling it “total rhubarb”—British slang for complete nonsense.

Paul Farthing, an ex-Marine who goes by the name Pen Farthing, airlifted 94 dogs and 69 cats from his animal shelter Nowzad from Kabul on a privately-chartered plane on Aug. 28, 2021, after waging a media battle with the British Ministry of Defence to get his flight cleared, but his staff and their family members, who were meant to travel in the same flight, had to be left behind at the time due to what he said were last-minute changes in paperwork rules made by the United States. The group crossed the land border to a neighbouring country two weeks later before flying to the UK.

Critics have since accused the UK government of prioritising animals over other evacuees. But Farthing insisted that he had brought the animals into the airport on his own and that he was “probably like the last person to enter” the airport after U.S. and UK troops had “obviously stopped taking people in” and closed the airport.

Answering a question in the House of Lords, Goldsmith said it’s “absurd” to suggest the prime minister “should be engaged in issues around the welfare of a handful of animals” when the government was operating one of the biggest evacuations in British history.

“I would be appalled if the prime minister had been involved in such minutiae,” the Foreign Office minister said.

Goldsmith told peers that the email from his office was not sent under his instruction and that there was some confusion in the process.

“It is not uncommon in Whitehall—as anyone who has been a minister knows—for decisions to be interpreted or portrayed as coming directly from one department or another or even the prime minister, even when that is not the case,” he said.

“In this instance, that is not relevant because the decision was made publicly and directly by the secretary of state [for defence], as he has made clear.”

The minister also sought to reassure peers that animals were not prioritised over people.

“Pen Farthing was on one of the very last flights to leave Afghanistan; he left on his own charter plane rather than on an RAF flight. It was not part of the evacuation effort, and the flight took place after the evacuation effort had ceased. That private plane landed in Kabul on Aug. 28. Animals were never prioritised over people at any point during the process,” he said.