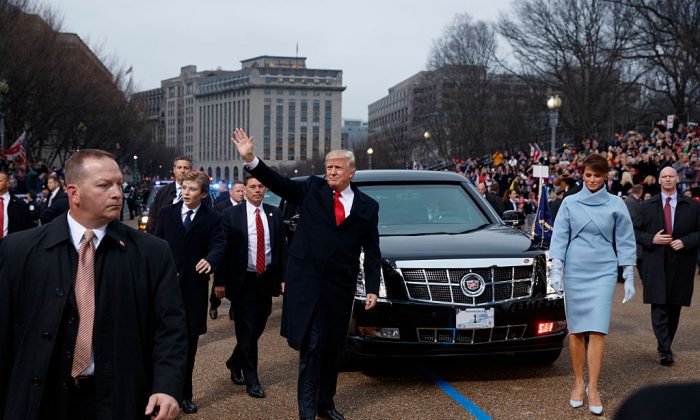 U.S. President Donald Trump waves to supporters as he walks the parade route with first lady Melania Trump and son Barron Trump after being sworn in at the 58th Presidential Inauguration in Washington, D.C. on Jan. 20, 2017. (Evan Vucci - Pool/Getty Images)
Opinion

Civility: Where Did It Go?

Consider how President Trump, his family, and his administration are often treated:

President Trump is insane; following psychiatric examination, he should be removed from office pursuant to the provisions of the 25th amendment of the Constitution.

Or he should be immediately impeached for violating the U.S. Constitution’s “Foreign Emoluments Clause,” which prohibits a president from accepting a gift or benefit from a foreign leader or government.

Moreover, President Trump is afflicted by an STD; his erratic action shows that he is suffering from syphilis.

And Barron Trump, the president’s 10-year-old son, is autistic.

Additionally, other family members are engaged in business transactions, illegally benefitting from the “Trump” logo.

And the U.S. Cabinet members are scumbags, and the Cabinet is filled with Russian shills.

So? What we have here is a decline in civility. In short, “civility sucks” for a significant element of the population.

Rosie O’Donnell Gets Backlash for Tweeting About Barron Trump

Or is it really the absence of any personal or societal penalties for incivility, insult, and slander/libel? And simultaneously the decline of the ability to use language in scathing insult that still holds to the manners of the day? (Earl of Sandwich to Disraeli, “I predict, Sir, that you will die either by hanging or of some vile disease.” Disraeli to Sandwich, “That all depends, sir, upon whether I embrace your principles or your mistress.”)

Indeed, what were once characterized as “four letter words” not to be used in polite conversation, let alone in family media, have slowly become common, with “s***” among the leaders. Perhaps only the “F bomb” remains verboten in prime time/family newspapers.

Moreover, in contrast to Great Britain, in the United States, it is almost impossible for a “public figure” to win a slander/libel suit unless the speaker/writer knows that the statement is untrue. The new normal is that you can say anything about anyone—reality show television is now political campaign rhetoric. Those being battered know recourse to courts often damages you more than your assailant.

In relatively recent times, charges and rhetoric such as those now being blithely bandied about would have been beyond the pale. Journalists studiously ignored actions by senior political figures, particularly presidents, that the mores of the day would have designated as immoral or at least embarrassing.

Thus, the crippled FDR appeared physically fit; the adulterous JFK and LBJ as faithful husbands; scatological language went unreported; heavy drinkers were ignored (unless they did something particularly noteworthy such as an overly refreshed Congressman Wilbur Mills accompanied by stripper Fanne Foxe—who then jumped into the Washington Tidal Basin). Homosexuality and child/wife “abuse” (actually incest-rape) didn’t exist. But the veil of studious anonymity was also extended to athletes, entertainers, religious figures, business executives.

Was this hypocrisy? Or just a mannerly decision that the public’s “need to know” didn’t include knowing such knowledge.

But now most public figures appear beyond embarrassment. One’s eyes can only widen with the “let it all hang out” (literally in sartorial styles) approach. Or what “mind altering substances” will generate in media. And dropping illegitimate children any/everywhere is just “par for the course.”

But this new age of insult may have limits. So, it is useful to recall an era where insult and bad manners could have fatal consequences for one who offended another’s honor.

Dueling is most widely remembered in the United States for the encounter in which then Vice President Aaron Burr shot and killed former Secretary of the Treasury Alexander Hamilton (Hamilton’s son was killed in an earlier duel). But, despite their illegality, hundreds of duels were fought during the period—largely pro forma affairs to satisfy “honor” without bloodshed but, obviously, not always.

Even more noteworthy, were the frequent duels, perhaps upwards of 100, fought by U.S. president Andrew Jackson (prior to his becoming president). Jackson repeatedly fought duels over his wife’s virtue, killing one man who accused his wife of adultery (while taking a bullet an inch from his heart from which he suffered throughout the next 39 years of his life).

Perhaps, we should reconsider legalizing duels—with their abrupt/direct consequences, rather than enriching lawyers with libel suits. While personal (im)morality has probably reached its nadir, if bad manners can have fatal consequences, incendiary rhetoric may cool.

Otherwise, those 2 a.m. presidential “tweets” may mean pistols at dawn, perhaps, efficiently, at Arlington Cemetery where a “free fire” zone beyond the law could be established.

Courtesy may yet rule again.