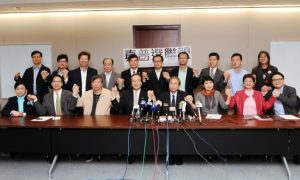 WASHINGTON— Beijing has no intention of ever allowing Hong Kong to practice universal suffrage in the election of its legislature or chief executive, and the freedoms enjoyed by the citizens of this city of seven million are eroding. In particular, the deterioration of the freedom of the press and an increase in police surveillance on rights activists are remolding Hong Kong to resemble a large city in mainland China.

This is the glum portrait that emerges from a special section devoted to Hong Kong in the 2013 report to Congress by the U.S.-China Economic and Security Review Commission (USCC).

“Many [pro-democracy groups] are afraid that the Mainland is seeking to postpose universal suffrage or stop it altogether by rigging elections to limit them to candidates who are pro-Beijing,” states the report. Because of the peculiar way the election system of the legislature and chief executive is set up, the Hong Kong government will continue to be dominated by pro-Beijing candidates.

In March, several pan-democratic groups demanded the Hong Kong government deliver universal suffrage in the 2017 election. A civil disobedience movement, called “Occupy Central” to support 2017 suffrage, may force a showdown with the authorities in April 2014. It demands the government allow the people to choose a road to political reform by ballot or else face a sit-in in the central city (Hong Kong’s core financial district).

The report contends that the mainland has increasing sway over the Hong Kong press. A pro-Beijing perspective is increasingly seen in editorials.

Madeline Earp, from Freedom House, testified that their data show that freedom of the press in Hong Kong is in gradual decline. In 2005, Freedom House ranked Hong Kong’s media freedom as “free”; in 2009, the ranking dropped to “partly free.”

Ms. Earp testified that physical and technical attacks against reporters, websites, and media entities were one factor for the decline. She gave the example of the website “In Media” that was raided by four masked men who destroyed the computers. In April, a cyber-attack forced it to shut down temporarily soon after it reported on a strike of Hong Kong dockworkers, she said.

Also working against an independent media in Hong Kong as well as in Taiwan are media buyouts by pro-Beijing media moguls of independent news outlets that have been critical of the Mainland. “Many Hong Kong media owners have business interests in Mainland China to protect,” states the report.

“In late 2012, Jimmy Lai, the outspoken owner of … Next Media and the pro-Democracy Apple Daily paper, sold his Taiwan media holdings to a group of businessmen supportive of [Beijing],” states the report.

The Hong Kong Journalists Association survey in 2012 found that 87 percent of the 663 journalists polled said that press freedom had declined in the seven year-long tenure of Donald Tsang as chief executive (2005-2012). Self-censorship was cited by 71 percent as a reason. The poll found that 36 percent of media employees said they or their supervisors had practiced self-censorship in the past 12 months.

However, cited more often than self-censorship is the tighter government controls on information, which 93 percent said was a reason for the decline.

For instance, the number of press conferences has diminished as these are replaced by communicating by press release, in which reporters lack the opportunity to ask questions.

“An anti-stalking bill that may be considered this year could hinder journalists’ ability to seek out information from sources.” states the report.

The report states that violence against the press is on the rise. For example, “In July 2012, a New Tang Dynasty television reporter covering a Falun Gong protest was threatened by a pro-Beijing counterprotestor wielding a butcher knife,” states the report.

Concerns were raised in the report about increased police tactics that appear intended to intimidate political protesters. Sophie Richardson, China director, Human Rights Watch’s Washington office, testified on June 27 to reports that suggest “an increasing number of arrests of and prosecutions against protestors.”

In year 2011, 444 protestors were arrested by the police, which surpassed the total number of protestors arrested since 1997, according to the Hong Kong organization Civil Human Rights Front.

Ms. Richards said, “Human Rights Watch is also concerned with the use of cameras and video recording devices by the Hong Kong police to film demonstrations, with close-up shots of demonstrators, even when there is no criminal behavior during demonstrations…Official surveillance is not only intrusive on privacy, but can inhibit exercise of the right to assemble and associate publicly.”

Richardson said that video cameras should not be used without some justification such as a threat to public safety.

“Hong Kong’s civil rights and liberties concerns have increasingly fallen through the cracks as other China-related issues have taken precedence,” states the report. When these issues are marginalized in our bilateral engagement with China, the United States is “compromising fundamental American values,” states the report.

To remedy the neglect, the Commission recommended, “Congress reconvene a congressional caucus on Hong Kong to ensure continuous attention to the region’s democracy and civil rights issue.”

The report’s findings and recommendations were based on a special hearing the Commission held on June 27. Commissioners also made a fact-finding trip to Hong Kong in July.

The changes described by the Commission are occurring despite the guarantees in Hong Kong’s Basic Law.

The Basic Law has been characterized as a mini-constitution that provided for the separation of the economic, social, political, and legal systems of Hong Kong from those of the communist regime when Hong Kong was returned to the People’s Republic of China in 1997. It states that the Hong Kong Special Administrative Region will retain its capitalist system and lifestyle for 50 years.

It also assures that the Hong Kong SAR would continue to enjoy such basic rights as the freedoms of the press, speech, and association, and for the rule of law under its inherited customary law. It was agreed to by China before Great Britain returned the region to the Mainland in 1997.

The PRC believed that Hong Kong had a unique economic role to play in helping provide mainland China with trade connections with the world. The USCC report notes that due to the ascendance of wealth of many mainland coastal cities and ports, such as Shanghai, Hong Kong has less economic importance to the mainland today.

Li Ka-shing, Asia’s richest man according to Forbes, who has had enormous influence in the Hong Kong economy, generally doesn’t give interviews. He recently gave a rare interview reported by The South China Morning Post, which quoted him as saying, “Hong Kong has many core values, such as an open market and the rule of law, which are not come by easily. If there is any mishandling in governance, these [values] would all be gone.”