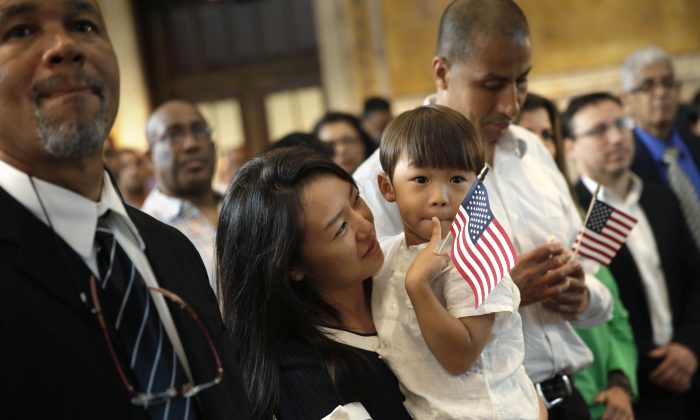 Citizens Sworn In Alongside Jefferson’s Declaration of Independence

Immigrants from 46 countries became new American citizens in a large swearing in ceremony at the New York Public Library on July 2.

With Independence Day just around the corner, the 150 happy Americans now have plenty to celebrate.

Laadi Akanjo, 44, came to the United States in 2008. She said she was excited to become an American. She recalls being equally delighted when she first came to the country, eager to learn about her new home. “I had never seen snow before. I was so happy.”

A rare manuscript of the Declaration of Independence, written in Thomas Jefferson’s hand, has been on display at the NYPL’s landmark building for the past week and will be removed Thursday.

NYPL President Tony Marx encouraged the new citizens to join in the debates that shape America’s future, much like the Founding Fathers did more than 200 years ago. “That document says it all. I hope it says for you today that the democracy you join is always changing and in debate.”

The ceremony concluded with a recorded message from President Barack Obama.

Among the new Americans was Danae Mohalland, one of the two active members of the United States Army who were sworn in. Mohalland, originally from Jamaica, joined the military in 2006 and served in Iraq. “It’s been a long time in the making,” she said.

Asked about the virtues of being an American, she responded, “It’s the freedom, the opportunities you can gain while being here.”

Michael Adeleke, 46, from Nigeria, spoke similarly about why he loves New York City. “As long as you know what you’re doing, you will do the best,” he said. Adeleke’s goal after entering the country was to get as much education as he could. He graduated from nursing school and became a licensed practical nurse.

“I wanted to help the sick and make them feel like they’re family so that they feel better,” Adeleke said. “Sometimes, it’s stressful, but I love it. It’s fun to me.” Adeleke’s family joined him in celebrating his citizenship, including his mother who traveled from Nigeria just for the occasion.

Uday Singh, 40, said he finally felt settled after becoming an American. He arrived from India in 1995 to attend business school. Although he found the naturalization process long and bureaucratic, Singh is glad to finally be allowed to exercise his rights as a citizen, and registered to vote at a booth set up at the ceremony.

“I feel more involved in the community. I look forward to taking part in the civic discourse,” he said. He plans to celebrate the upcoming July Fourth with friends—”as an American.”