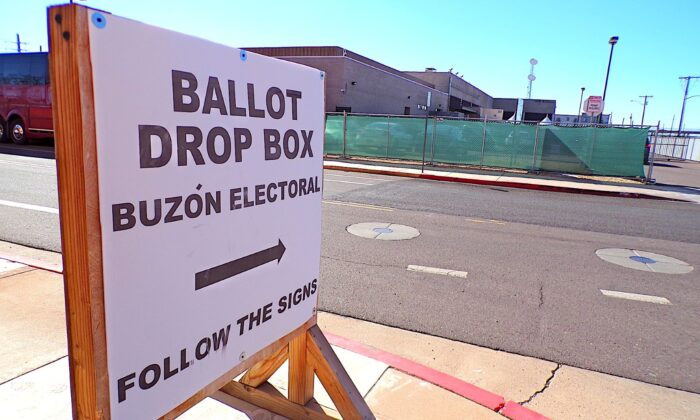 A sign points the way to a ballot drop box inside a secure perimeter of the Maricopa County Sheriff's Office in downtown Phoenix on Oct. 25, 2022. (Allan Stein/The Epoch Times)
By Steven Kovac

Melody Jennings, the founder of the election integrity group Clean Elections USA, has responded to a civil lawsuit alleging that she, her group, and 10 other unnamed defendants engaged in a conspiracy to commit voter intimidation in violation of federal law, an accusation she says is untrue.

The plaintiffs in the case are the Arizona Alliance for Retired Americans and Voto Latino, both nonprofit organizations.

The two nonprofits are represented by a team of 10 attorneys, including the Elias Law Group.

The Arizona issue arose earlier this month as Jennings helped to mobilize a group of grassroots volunteers to watch over absentee ballot drop boxes in Maricopa County and at locations in seven other states, including Pennsylvania and Michigan.

“This is a spiritual battle. It is not against flesh and blood,” Jennings told The Epoch Times in a phone interview on Oct. 26, the day the first pleadings of her case were to be heard in the U.S. District Court of Arizona.

Jennings, a self-described “nobody,” said she appreciated the ongoing prayers of supporters from around the country, whom she calls “intercessors.”

She said that she was preparing to enter into “a David versus Goliath” conflict.

“I’m in the space of a warrior-like calm,” she said.

“The allegations made against us in this litigation are false,” Jennings wrote in a public statement. “All activities supported by Clean Elections USA are lawful and designed to support lawful elections.

“We look forward to defending against this partisan effort to undermine election monitoring.”

Jennings, who isn’t a resident of Arizona, told The Epoch Times: “CEUSA is a decentralized grassroots movement that I started in April.

“After seeing the teaser of the movie ‘2000 Mules,’ I began asking people what we ordinary people can do about this besides passing memes back and forth on the internet.

“We are aware and awake now. We’ve got to get our country back.”

She said that after much prayer and meditation, she came up with the idea of getting groups of concerned and patriotic citizens together to watch for any potential absentee ballot box stuffing in the midterm elections.

“Our people are trained and break no rules,” she said, referring to conduct such as voter suppression, voter intimidation, or even electioneering activities, which are prohibited by law within a certain distance from where voting is taking place.

“In Arizona, we are careful to maintain the 75-foot distance from the drop box. We work at outdoor boxes only.

“We encourage our people not to go alone for safety reasons. We are 100 percent law-abiding.”

Jennings stated that CEUSA is very cautious about “infiltrators” and provocateurs sent by the opposition to try to incite something.

“Our teams, usually of 10, are trained not to engage with voters or others. We want a boring night,” she said.

The 64-page complaint, dated Oct. 24, states that over a span of four days, three Maricopa County voters submitted complaints of voter intimidation near both of the county’s two outdoor drop boxes.

It alleges that the defendants have either actually or attempted to intimidate, threaten, or coerce Arizonans who are trying to vote, something Jennings strongly denies.

“We gather together peaceably. We sit around on lawn chairs, eat snacks, talk, read, and conduct Bible studies, while keeping an eye out for any suspicious activity around the drop boxes,” she said.

In the petition for preliminary injunction, the plaintiffs’ attorneys assert that there’s no need for citizens’ groups to watch over absentee ballot drop boxes because “election officials are already monitoring drop boxes and have not reported any issues.”

Jennings disputes assertions that there have been no suspicious incidents, citing instances where cars have pulled up to a drop box with their license plates covered.

In the complaint, the plaintiffs’ attorneys call citizen efforts to monitor absentee ballot drop boxes to deter election fraud “a paranoid conspiracy.” They characterize the movie “2000 Mules” as a “propaganda film” and repeatedly assert that “there are no mules.”

A “mule” is a person who engages in ballot harvesting for money, often using absentee ballot drop boxes to deposit stacks of ballots.

The plaintiffs’ attorneys allege that legitimate voters “are being targeted” by drop box watchers.

The complaint is based on federal civil rights and voting rights laws, which, it alleges, the defendants have violated.

Jennings told The Epoch Times that absentee ballot drop box watchers are lawfully exercising their constitutional rights and are intimidating nobody.

Plaintiffs contend that federal standards don’t necessitate proving a defendant’s intent to intimidate voters and that a voter feeling uncomfortable as a result of someone’s presence may constitute intimidation.

The complaint contains photos of two alleged drop box watchers who showed up armed and wearing some tactical gear on two evenings this month.

Arizona is an open-carry state.

The plaintiffs’ lawyers argue that federal law says that the mere presence of a drop box watcher may be perceived by a voter as intimidation and are asking the court to require that the watchdog groups remain “out of sight” of the boxes.

They also contend that a person, present or not present, who takes any action, makes any internet post, or even makes verbal comments supporting and encouraging drop-box-watching activities may be considered part of the conspiracy.

Resolution by a federal court of the clash of rights raised in the Jennings case may have nationwide implications.

In an Oct. 28 email to The Epoch Times, Jennings said she is “waiting on the judge to decide.”