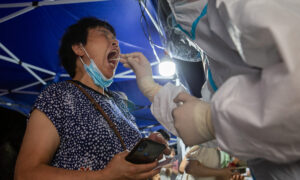 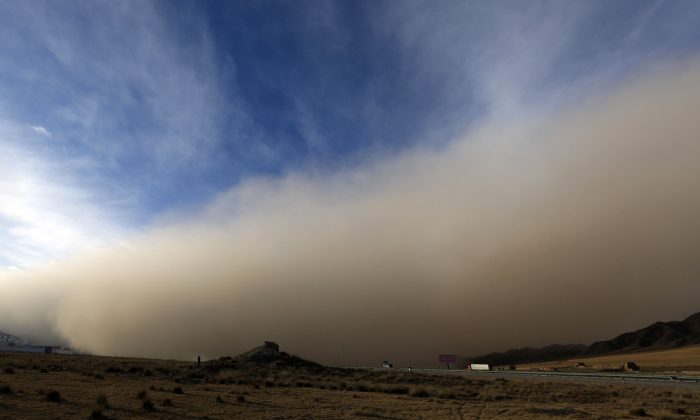 This photo taken on November 25, 2018 shows a sandstorm rolling into Zhangye in China's northwestern Gansu province. A northwest Chinese city was engulfed by a massive sandstorm that sparked rural fires, forced traffic to slow down and prompted residents to cover their faces, according to state media. (AFP/Getty Images)
China

The Hexi Corridor or Gansu Corridor, a long, narrow passage stretching for some 1,000 kilometers (about 600 miles) in northwestern China, was hit by sandstorms sweeping from west to east. On the evening of Nov. 26, Jiuquan, Jiayuguan, Zhangye, Wuwei and other cities issued yellow warnings for sandstorms.

The air quality index in many major cities reached more than twice of the threshold set for monitoring air pollution. Air pollution in one city exceeded the limit by three times.

In China, sandstorm warnings are divided into three levels, yellow, orange and red, as determined by the China Meteorological Administration. The yellow sandstorm warning is defined as visibility less than 1,000 meters (3,280 feet), as well as possibility of sandstorms within 12 hours.

A resident from Zhangye City located around the middle section of the Hexi Corridor said that it was still sunny and clear on the morning of Nov. 25, but starting around 4:00 p.m., sand and dust driven by a strong wind formed a nearly 100-meter-high (328 feet) storm that approached the city and soon engulfed it.

Videos in Zhengye taken around 4:00 p.m. in the report show sandy wind rolling to the city from a distance and gradually swallowing it. As the wind and sand slowed, it left a dim yellowish hue in the sky.

People in many places in the Hexi Corridor had difficulties breathing freely due to the sandstorm, according to the state-run China News.

PM10 is particulate matter or particle pollution, a mixture of airborne solids and liquid droplets equal to 10 micrometers in diameter. The particles can lodge themselves in the lungs and cause serious respiratory and other health problems.