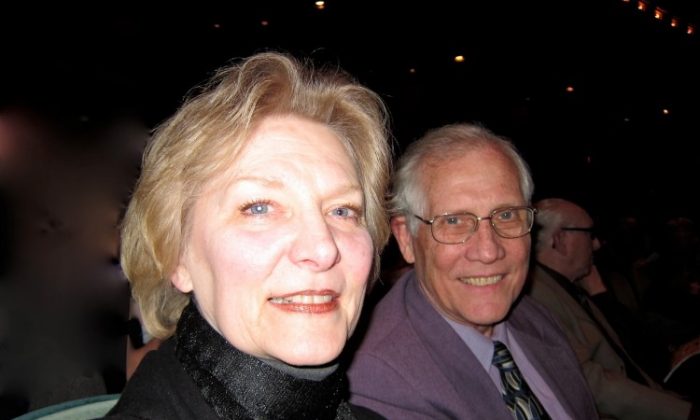 CINCINNATI, Ohio—Rounds of applause resulted in two curtain calls at Aronoff Center for the Arts for Shen Yun Performing Arts return to Cincinnati, on the unseasonably warm evening of Feb. 3. Tom Zalla, a certified financial planner, and his wife Paula, a retired music teacher, were among the audience who found the presentation of traditional culture fascinating.

Some of the steps and poses of the dances reminded Mrs. Zalla of tai chi that she and her daughter are currently learning. Her recognition is not surprising since both martial arts and gymnastics actually originated from classical Chinese dance, according to the company’s website.

Themes in Shen Yun that stood out for Mrs. Zalla were those of the “higher selves and enlightenment.” She noted that the pieces the soloists sang, such as the soprano’s “The Truth Has Been Told for Awhile” and the tenor’s ” Break Open the Gates of Illusion” contained few words.

“There were not really that many words, and the phrases were repeated again and again; but, they were repeated because they were so very important, and because it was just a very basic sort of golden rule of the world.”

Mrs. Zalla appreciated that the words of the songs are printed in both Chinese and English on the stage backdrop.

Dr. Zalla stated that he found himself identifying with the Chinese characters and looking for the repetition of the character.

“You get a little bit of a flavor of how much more complex the [Chinese] character is than the [English] word,” Dr.. Zalla said.

There will be one more performance at The Aronoff Center for the Arts in Cincinnati on the evening of Jan. 4.