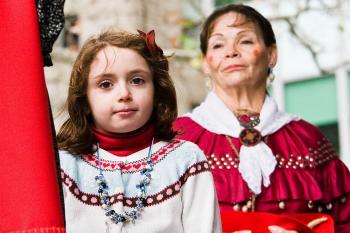 A young girl waits on stage before she exchanges the necklace, made of traditional Dutch beads, with the necklace of a boy of the Lenape tribe wearing a traditional Native American necklace on Nov. 27 (Jasper Fakkert/The Epoch Times)
US

By Jasper Fakkert
Print
NEW YORK—It took 400 years, but an apology was made on Friday by the Collegiate Church community to the Lenape tribe for their suffering and dehumanization.

“We consumed your resources, dehumanized your people, and disregarded your culture, along with your dreams, hopes and great love for this land … We the Collegiate Church recognize our part in your suffering,” said Reverend Robert Chase of the Collegiate Church at the reconciliation ceremony.

The Collegiate Church was the first protestant church in New York, built in 1628 as part of the Dutch settlement located on the Southern tip of Manhattan called ‘New Amsterdam.’ Because at that time the church was the “conscience of the community,” Reverend Chase thought that the time had come for the church to acknowledge and apologize for the church's role.

The long awaited apologies were made in front of the National Museum of the American Indian in Lower Manhattan, where the Collegiate church once stood.

The Lenape once lived in the lush forests of this region, reaching from what is now New Jersey, Eastern Pennsylvania, and Southern New York, living as an interrelated network of independent villages.

The Lenape creation myth tells of a great turtle raising from the depths of the great waters, growing to become the north American continent, called Turtle Island.

Their lives changed dramatically with the arrival of the first European settlers.

According to Lenape Web sites, the Lenape population at that time could have been as high as 20,000. After the population declined to a total of about two thousand in the 19th century, it has recovered to almost 16,000 at present, with many Lenape living on reservations in Oklahoma.

Historical records show that the relations between the Dutch and Native Americans were initially good, but over the years, tensions over territory, farming and hunting grounds, unfair trade by the Dutch, and Dutch involvement in intra-tribal conflicts, led to violent conflicts and massacres of the Native Americans.

As a direct descendant of Sarah Rapelje, the first Dutch woman born in what was then known as the New Netherlands—the Dutch settlement in the greater New York region, this is very personal for Reverend Chase. “It was my ancestors who did this to other peoples' ancestors.”

The Dutch West India trading company, at that time thought they had purchased Manhattan Island for 60 guilders, equal to two months salary of an average craftsman in Holland. It is believed that the Lenape, who did not have the concept of private property, did not think the Dutch were buying the land—but thought instead the Dutch were thanking them for aid given to the settlers.