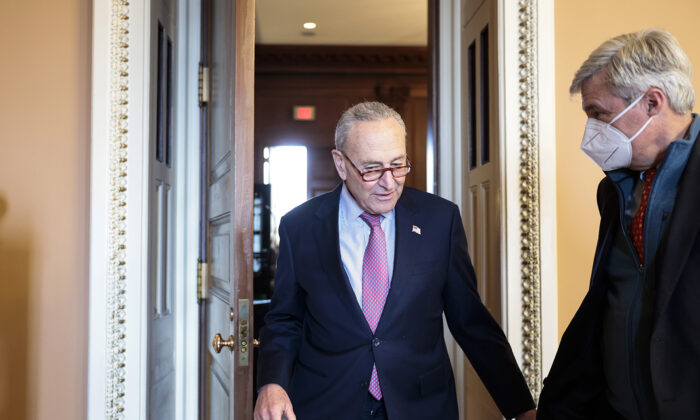 Hypocrisy and lies from politicians are so rampant in Washington that hardly anyone pays them much attention anymore. Perhaps that is why our cynicism about so many things political deepens and distrust of our institutions is pervasive.

A co-conspirator in all of this is Senate Majority Leader Chuck Schumer (D-N.Y.), who has set the middle of the month as his target for changing the filibuster rule that requires 60 votes to pass most legislation. That Schumer has opposed what he now proposes is well-documented for anyone taking the time to do even minimal research, which most of the major media appears unwilling to do.

In 2005, Schumer claimed that eliminating the filibuster would turn the country “into a banana republic, where if you don’t get your way, you change the rules. Are we gonna let them (presumably he meant Republicans)? It will be doomsday for Democracy if we do.” Well, then, has “doomsday” arrived and is Schumer its captain?

In 2017, Schumer said if you can’t get 60 votes “you shouldn’t change the rules.” Does anyone seriously think that if Democrats were the minority party, which they likely will be after the next election, that he would still favor elimination of the filibuster?

At the same time, during confirmation hearings for Neil Gorsuch to become an associate justice on the Supreme Court, Schumer said of then Majority Leader Mitch McConnell, “He’s bound and determined to change the rules and trample on Senate tradition” to get a conservative nominee approved.

As the conservative Federalist Society correctly notes: “Our system leaves the details of the election administration to individual states. Those details include the specifics of election day rules such as the time for opening and closing polling places, absentee ballot procedures (including emergency absentee balloting), early voting, registering to vote, and the regulation and prosecution of election irregularities and election crimes.”

Schumer reminds me of a quote from the late Groucho Marx: “Those are my principles and if you don’t like them, well I have others.”

The Schumer initiative is a power grab. The Left, which now controls the Democratic Party, wants to federalize elections, removing from states their right to decide how they wish to conduct their election procedures. Democrats are framing this as a civil rights and “fairness” issue, but it is not difficult to see what their true goal is: the creation of an electoral system that will allow them a permanent majority at the federal level.

Already Democrats have succeeded in a number of areas, including extended voting hours and ballot drop boxes. The bill backed by Schumer would eliminate the voter identification requirement and allow ballots that arrive after Election Day to be counted, among other changes. This can only deepen the public’s distrust of election outcomes. If we think it’s bad now with the large number of people who continue to believe, without evidence, that the 2020 election was “stolen” from Donald Trump, wait until this monster is passed. It will only divide us further if that’s possible.

Fortunately, there are some Democrats, such as Senators Joe Manchin (W.Va.) and Krysten Sinema (Ariz.) who have stated their support for continuing the 60-vote requirement. One hopes, as with their opposition to President Biden’s massive social spending bill, that they will stick to their principles.

A Wall Street Journal editorial got to the heart of Schumer’s hypocrisy and his attempt to link the disingenuously labeled “Voting Rights Act” to last year’s Capitol riot. The editorial concluded that “is like comparing criminal justice progressives to those who attacked police and property at Black Lives Matter protests last year. His aim is not to protect democracy, but to blow up Senate rules for partisan gain.”