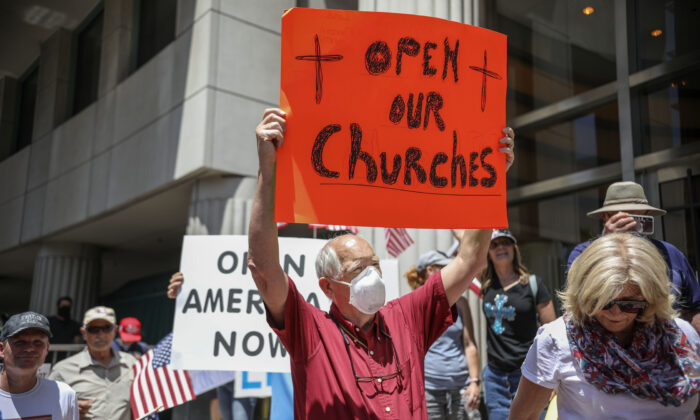 Demonstrators holding signs demanding their church to reopen, protest during a rally to reopen California and against stay-at-home directives in San Diego, California, on May 1, 2020. (Sandy Huffaker/AFP via Getty Images)
Viewpoints

As a former atheist who has been a reasonably practicing Roman Catholic for 51 years, I hope I will be pardoned a few Easter thoughts.

I didn’t desert non-belief with a burning fire of Revelation, but because I concluded that spiritual forces were abroad in the world and that there was thus probably a divine intelligence that could perhaps be propitiated. There have been a number of divinely inspired people, and there’s no reason to doubt that the most famous such person advised St. Peter to found a church, whose most likely current continuator is the Church of Rome. I’m an adherent to the school of religion being a personal matter that one rarely discusses other than with specialists in the field or intimates. My partial departure from that practice now is not to inflict theological thoughts on the reader but to reflect on the status of religious belief and institutions today, after they’ve received a sequence of heavy blows.

Anyone who knew anything about the Roman Catholic Church was aware that, for obvious reasons, it had in its clergy a higher percentage of homosexuals than there are in society as a whole. It was reasonable to assume that most of them adhered to their vows of abstinence, and if they did so, they had as much right to their position of trust as anyone else. But it could also be surmised that in the heavily cloistered lives of unisexual celibacy in a hierarchical organization, there would be abuses.

It was my privilege to know a number of the outstanding religious figures in the history of Canada and elsewhere, and I knew from them that the key to avoiding these terrible problems was to keep clergy one might judge to be susceptible to these temptations away from young people. Many bishops were insufficiently worldly or prudent to do this, and the consequences, especially but not exclusively for the Roman Catholic Church, have been a public relations, financial, and morale disaster. It could scarcely have been otherwise.

As these developments came sluggishly to the surface at the same time that women generally became more assertive than ever in denouncing and demanding the punishment of male harassment and assault, which under previous rules of evidence were almost impossible to prove and were widely considered to be somewhat stigmatizing, the collective ambience in which claims of wrongdoing against church personnel were heard was extremely receptive and hostile.

Throughout modern history, there has been a large body of people at all times who were skeptical of religion generally and suspicious of the churches as propagators of ignorance and charlatanism. In these times of frequent and apparently undoubtedly well-founded complaints that shocking numbers of children, novices, and junior clergy were sexually assaulted, often relentlessly and even sadistically, all of the ancient foes of religious institutions and particularly the Roman Catholic Church, as the premier ecclesiastical organization in the world, swarmed the beset edifices of the churches and inflicted as much damage on their respectability, self-confidence, and fiscal stability as they possibly could.

In my experience, antagonism to Christianity is approximately as fervent and assertive as is faith in it, and when the churches, and the Roman Church in particular, were stripped naked before their enemies, plausibly accused of hideous institutionalized perversion and gross abuse of their unique position of trust and faith, they were bound to face, to use an expression that is bandied about with tiresome frequency, “an existential crisis.”

The temptation and the ability of atheistic secular officials to pillory the Roman Catholic Church in particular with its emphasis on celibacy as a vast closet of deviants was irresistible, and was carried to extremes that made the adjudication of the alleged misconduct gratuitously revolting. As just one illustration, there was no excuse for prosecutors in Los Angeles to threaten to charge the former Cardinal Archbishop of that city with operating a Racketeering Influenced and Corrupt Organization (RICO) because of an alleged pattern of criminal wrongdoing in sexual abuses. The church was lumbered in Los Angeles alone with a financial settlement of $660 million. There have been a great many other very large awards throughout the Western world and extending to other Christian churches as well for abuse of children and other derogations from their sacred trust.

On the heels of this terrible worldwide debacle, there came down the COVID-19 pandemic and the general shutdowns, and, however unexceptionably motivated it may have been, an attempt practically to close the churches to those who still wished to attend them. The act of receiving the sacrament of communion became a mundane ceremony one might more likely expect to encounter in a hospital. Not being the most indomitable churchgoer, I simply could not face it for two years. In their morally battered state, the churches generally offered up little resistance, and it didn’t require even an unlicensed psychiatrist to detect the joy with which many officials did all that they could, waving their pandemical authority about, to discourage church attendance, which was deemed a much less important action than visiting the liquor store. The mentality that prosecuted the Little Sisters of the Poor and purported to require Roman Catholic institutions to pay for the abortions of their students or employees could scarcely be expected to resist the temptation to harass churchgoers. It’s all part of the dogma of the unofficial state religion of the entire West: atheism.

The secularists have enjoyed such a long sequence of official victories, from, in President Ronald Reagan’s words, “expel[ling] God from our children’s classrooms,” to banishing references to the Almighty with the fervor of pest exterminators (the steady gains of the pro-life advocates being the only fly in this ointment), some of them must have imagined that they had finally killed the practice of the Christian faith. Numbers were diminished this Easter from what I remember, but it’s clear that everyone except the atheists understand that we are all sinners, and the failings of the clergy—those people bold enough to try to intercede between the terrestrial world we all know and the great beyond and hereafter that is a matter of speculation and much skepticism—are regrettable and in recent years have often been tragic and criminal. But they are failures of the practice of the faith, not of the faith itself.

The greatest danger of atheism is that in the expulsion of God from our minds and consciousnesses, a vacuum will be created that will inevitably be filled by ambitious men. It was one thing for Alexander the Great and Julius and Augustus Caesar to accept partial deification; none of them was an atheist. We saw with Robespierre and Hitler and Stalin what happens when pagans occupy the area of the human consciousness formerly inhabited by religious faith and conduct their pursuit of the perfectibility of man as they conceive him.

Christians are chastened and disappointed but not dispirited. It was not acceptable for a former Fox News commentator to say that Dr. Anthony Fauci reminded her of the Nazi Dr. Joseph Mengele, but Fauci has shown us the perils of “following the science.” Faith is logical but elusive; it will not be stamped out and there must be more to the world than the thin gruel of the atheists, or even the ambitious scientists.