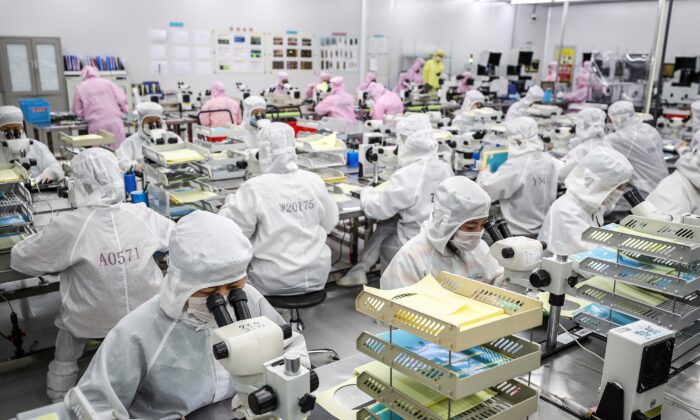 Workers producing LED chips at a factory in Huaian, in China's eastern Jiangsu province, on June 16, 2020. (STR/AFP via Getty Images)
By Anne Zhang

Anne Zhang
Anne Zhang is a writer for The Epoch Times with a focus on China-related topics. She began writing for the Chinese-language edition in 2014.
View profile
and Lynn Xu

Chip sales in China have tumbled at a whopping rate, as productivity in the semiconductor-related sector has contracted dramatically, indicating that the country’s manufacturing industry is shrinking, according to the latest industrial report.

The Washington-based Semiconductor Industry Association (SIA) released data on Jan. 9 indicating that compared to the same period in 2021, China’s chip sales plummeted by 21.1 percent in November of 2022. Meanwhile, in the United States, chip sales rose by 5.2 percent; sales in Europe increased by 4.5 percent year-on-year; and sales in Japan went up by 1.2 percent.

The move could be a heavy blow to a wide range of manufacturing areas, including automobiles, mobile communications equipment, and computers.

In November 2022, China’s output of microcomputer equipment plunged by 27.9 percent; and mobile communication handheld devices dropped 13 percent, including a 19.8 percent decline in the production of smartphones from the same period last year, according to data released by China’s Statistical Bureau.

A Purchasing Managers’ Index (PMI) reading below 50 indicates a contraction in manufacturing and service sectors, according to industrial statistics methods. This gloomy data was seen for most of last year in China.

China’s Bureau of Statistics published a report on Dec. 31 saying that China’s PMI remained under 50 for most of last year, with the exception of January, February, June, and September, which were slightly higher than 50. In the fourth quarter of last year, China’s PMI fell sharply for three consecutive months, with its December PMI hitting a record low of 47.

In recent years, the Chinese manufacturing sector has declined due to factors including pandemic measures, an increasingly tense relationship between the United States and China, and lower demand due to global inflation.

The year 2022 was the most impacted, with frequent factory shutdowns, disrupted supply chains, and constantly decreasing worker numbers. Many of those factors were linked to the Chinese Communist Party’s (CCP’s) extreme zero-COVID policies.

Last August and October, the United States introduced multiple policies to block the CCP from accessing advanced U.S. technology and equipment, and to stimulate the return of high-tech manufacturing to the United States.

Other factors, including the war between Russia and Ukraine, led to soaring prices for commodities such as energy and food, and high inflation that eroded global consumption capacity.