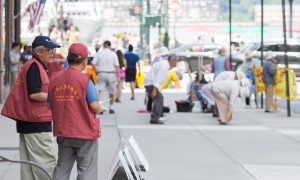 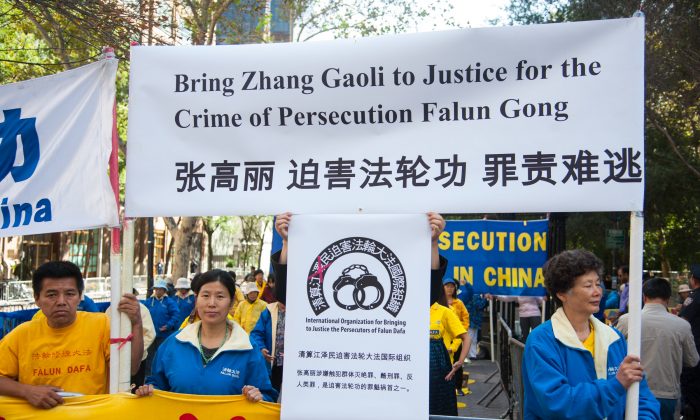 Falun Gong practitioners stage a peaceful protest against China's Vice Premier Zhang Gaoli, who is believed to be guilty of genocide, torture, and other crimes against humanity, during the Climate Summit at the U.N., in New York City, on Sept. 23, 2014. (Dai Bing/Epoch Times)
China

“We wanted to deliver that letter in person to Mr. Zhang, but were told that that’s not possible,” said Wang’s younger brother, Wang Bing Wu, 56, an engineer, “I feel sad, because we could not meet Mr. Zhang in person as we had wished. … My brother has suffered three strokes in prison—we’re pleading for his health conditions.”

Zhang, who is the third-highest ranking official in the People’s Republic of China, is in town for the U.N.’s Climate Change summit. The PRC head of state, Xi Jinping, stayed home.

Wang Bing Zhang was abducted from Vietnam and sentenced to life in prison in Guangzhou, China, after giving up his career as a surgeon to form two pro-democracy movements in New York and overseas. According to his younger brother, the Chinese regime fabricated two charges for Bing Zhang’s prison sentence—espionage and terrorism.

“My brother is already 66 years old,” said Bing Wu, who traveled down from Canada with his older sister to see the vice premier.

“We hope they recognize it should be a democratic process. We’re here to make a plea to let him go and reunite with his family,” he added, having been refused to enter China last month.

The last time he saw his brother was in February. Their mother passed away three years ago, and although Chinese officials promised otherwise, Bing Zhang was not released to attend the funeral.

In Midtown Manhattan Tuesday morning, large groups of people, not just Bing Wu and his sister, were protesting in hopes of being heard by Zhang or onlookers on their daily commute.

Among them was a contingent of 150 practitioners of the spiritual discipline of Falun Gong. They demonstrated the practice’s gentle exercises and held up banners outside the United Nations, where Zhang attended the summit.

According to the World Organization, “Zhang is suspected of committing the crime of genocide, the crime of torture, and crimes against humanity.”

“The persecution happened directly under Zhang,” said David Tompkins, 50, a spokesman for the Tuidang Center, which asks Chinese people to quit the ruling Communist Party. “And this is a person who’s going to speak at the U.N. today! So that’s why we’re here.”

Tompkins has practiced Falun Gong for 13 years, first discovering the practice in 2001 at a university where he worked. As he walked through the building, he saw people doing the exercises.

“The guy who I was talking to, he didn’t speak much English. He just said Falun Gong is very good for returning to your true self. It seemed very peaceful and very good, so I went and learned the exercises and began to study the book Zhuan Falun,” said Tompkins. “And as I studied more and more, I found it be something very wonderful.”

Tompkins said that he found it hard to explain the persecution to people because the actions of the Chinese regime were senseless.

Many practitioners were forced to flee China after being sent to labor camps for multiple years, where they typically face abuse, including torture and brainwashing.

“We can’t sleep, there’s no food, we’re deprived of toilets, they put a special number on you to mark you as a special person to be watched,” said Bing Ji, 70, who used to work in management prior to escaping China. “They ordered us to stop practicing, or else we’d get no sleep or food.”

Forty-three-year-old Wang Hui Juan, who had been a teacher for one of the top primary schools in Tianjin City, said that her entire family had practiced Falun Gong, and at one point, they were all imprisoned at the same time except her mother-in-law who had to watch the children of seven families.

“My husband and I decided that we didn’t want to be persecuted anymore, so we gave up tens of thousands of assets and came to the U.S.,” said Wang, who was imprisoned in a labor camp from 2002 to 2009 where she was cuffed to a bed for hours and forced to sit on a small stool—two commonly used tortures.

Among the crowd gathered in front of the Waldorf Astoria were individuals whose grievances have not been addressed, even though they have petitioned Chinese authorities for years.

Wenran Chen, 58, a former employee of People’s Bank of China, came to protest an apartment building that exploded in 2011.

“Nothing—the government did nothing,” Chen said. “My problem is very simple, but the government didn’t value human life or rights. So I had to come to the U.N. and the higher level officials.”

Former manager Ma Yongtian, 50, said, “In 2001, the Jilin Province government took apart my factory and stole all of my possessions. It’s been 14 years but I haven’t been paid a cent in return.”

“I don’t know where in China I can live anymore,” said Ma, “The government is used to violently cracking down on its people.”