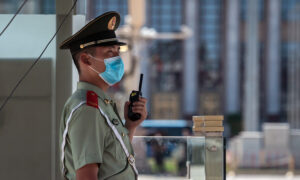 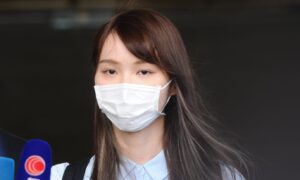 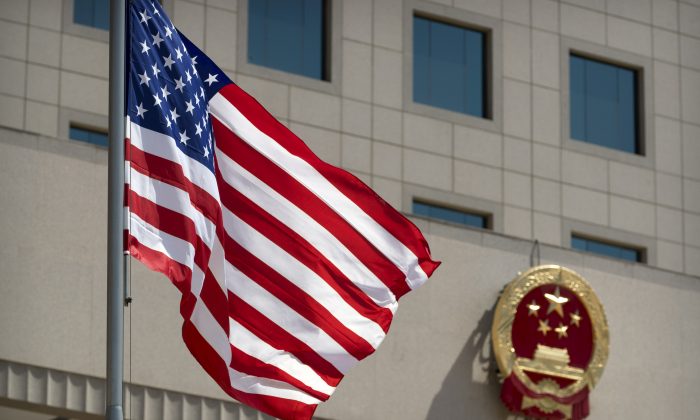 The American flag outside the Bayi Building before a welcome ceremony for U.S. Defense Secretary Jim Mattis in Beijing on June 27, 2018. (Mark Schiefelbein/ Reuters)
Chinese Regime

Chinese Subversion of the United States Is Deep and Far Reaching

For decades, the Chinese Communist Party (CCP) has been subverting the United States by infiltrating, undermining, and influencing its key institutions.

This topic is only recently coming to the surface. Vice President Mike Pence said on Oct. 4, “Beijing is employing a whole-of-government approach to advance its influence and benefit its interests.”

He added that the CCP is working to influence U.S. elections and domestic policies, and “today, the Chinese Communist Party is rewarding or coercing American businesses, movie studios, universities, think tanks, scholars, journalists, and local, state, and federal officials.”

Pence does a great job giving an overview of the problem, and his talk is well worth watching if you haven’t seen it. But if we take a look at some examples of the problem, it becomes much more real.

Censorship and Theft in US Business

With the subversion of businesses, the CCP is forcing U.S. companies to abide by its domestic censorship programs.

On April 25, the CCP’s Chinese Civil Aviation Administration sent a letter to 36 foreign air carriers demanding they change the descriptions of “Taiwan,” “Hong Kong,” and “Macao” to follow CCP propaganda. The White House responded to this demand on May 5, with the press secretary saying, “This is Orwellian nonsense, and part of a growing trend by the Chinese Communist Party to impose its political views on American citizens and private companies.”

Many companies also agree to follow CCP censorship. Google and Facebook are examples of this, since even though they’re blocked in China, they have both agreed at times to take down content for the CCP.

There has also been plenty of chatter about Chinese economic theft. But did you know that some U.S. companies are forced to knowingly hand over intellectual property to access the Chinese market?

A 2017 U.S. government survey of the integrated chip industry found that 25 companies were forced to form joint ventures with Chinese companies, and transfer their technology. The United States has lost close to $1.2 trillion from intellectual-property theft, mainly from the CCP, over the last three years, according to The Hill. That number doesn’t even include patent infringement.

The CCP has even gone to the source with this type of theft, and according to former senior U.S. Naval intelligence officer John Jordan, China’s Ministry of State Security has agents in Silicon Valley assigned for this purpose.

There is also spying on customers, and this goes to the chip level of devices. Bloomberg recently claimed the CCP was spying at the chip level on Amazon and Apple devices. Examples of the CCP spying by through supply-chain threats goes back much farther, however, and includes chips, firmware, infected apps, data-sharing programs, and other vulnerabilities.

The Epoch Times has reported on this since at least 2010.

Subversion of Films and Entertainment

As part of its focus on “culture warfare,” the CCP has also subverted Hollywood and the U.S. entertainment industry.

The U.S.–China Economic and Security Review Commission reported in October 2015 that “China views film as a component of social control,” and that when regulating film, “the CCP’s concerns are positioned above all other interests.”

Films are screened by the CCP’s State Administration of Press, Publication, Radio, Film, and Television, which decides whether they can be shown in China, and filmmakers are actively catering to the administration’s policies.

Some filmmakers are agreeing to co-produce films with the administration, which gives them a stronger chance of entering China, but also ensures the films fall under the CCP’s laws on films and censorship.

CCP laws on films include requirements, among many, that they need to have at least one scene shot in China, cast at least one Chinese actor, and illustrate “positive Chinese elements.”

Anything that shows the CCP’s human-rights abuses, poverty, totalitarian social monitoring, or other serious issues aren’t allowed to be shown. Under CCP censorship law, Hollywood also can’t show the United States or U.S. military in a positive light.

This is serious when you consider how much of the U.S. film industry either is directly owned by Chinese companies, such as through the Dalian Wanda Group, or has agreed to work with the CCP.

Influence of US Universities and Education

Through financing, research partnerships, and other joint programs, the CCP has also managed to subvert American universities.

Foreign Policy reported in May, “On campuses across the United States, funding gaps are leaving departments with little choice but to turn to those groups with the deepest pockets—and China is keen to offer money, especially through its global network of Confucius Institutes.”

This money comes with a price, however, since the CCP takes its Faustian bargain as an opening for censorship and influence.

Foreign Policy, for instance, noted that the co-director of Savannah State University’s Confucius Institute has directly engaged in censoring information on Taiwan.

Then there are the Chinese Student and Scholar Associations (CSSA), which are often openly financed and directed by Chinese consulates. The CSSA pressure Chinese students and block events in American universities, based on CCP censorship programs.

In one case at the University of California–San Diego in 2017, the local CSSA tried to block the Dalai Lama from speaking at commencement.

It states, “Over the past two decades, PRC diplomats stationed in the United States have infringed on the academic freedom of American university faculty, students, administrators, and staff.”

The CCP has done this by “complaining to universities about invited speakers and events; pressuring and/or offering inducements to faculty whose work involves content deemed sensitive by the PRC authorities” and other methods, the report says.

Sometimes, the CCP’s pressure includes threats and intimidation of professors.

At think tanks, which have a role in shaping government policy, the CCP has made significant efforts to push its interests either through funding, through partnerships, or by influencing the academics involved.

Bill Gertz at The Washington Free Beacon reported on Aug. 24 that one of the CCP’s main overt spy agencies, the United Front Department, is actively involved in operations to influence think tanks in Washington.

He cites a congressional commission report, stating the CCP “employs tens of thousands of operatives” to promote its policies, and includes “paying several Washington think tanks, with the goal of influencing their actions and adopting positions that support Beijing’s policies.”

The report says the CCP “has sought to influence academic discourse on China and, in certain instances, has infringed upon—and potentially criminally violated—rights to freedoms of speech and association that are guaranteed to Americans and those protected by U.S. laws.”

“The funding for Johns Hopkins came from Tung’s non-profit group in Hong Kong, the China–U.S. Exchange Foundation, which is a registered Chinese agent,” he writes.

When it comes to the academics themselves, the CCP actively pressures them to self-censor. Academics who break CCP censorship policy, including on the regime’s serious human-rights violations, risk being blacklisted from China.

The paid inserts have in the past defended the CCP’s often brutal human-rights violations and excused its crackdowns on religious liberty. Sometimes, the paid inserts correspond with broader pushes. This has included paid inserts in The New York Times and other outlets, alongside paid broadcasts from CCP state-run media in Times Square to defend the CCP’s military push into the South China Sea.

Part of this was run through Xinhua news agency, which the Trump administration in September ordered to register as a foreign agent. Let that sink in: Foreign agents interested in shaping U.S. public opinion are paying major news outlets to republish propaganda.

This doesn’t just tie to CCP government policy. It also ties to its military doctrine, under its “Three Warfares” system of psychological warfare, legal warfare, and media warfare.

The goal of Three Warfares is to alter how people interpret information, create legal blockades to defend CCP actions, and control people’s exposure to information through its influence on media.

“The ‘Three Warfares’ were injected into a section of guidelines that has been consistent since at least the 1963 revision, which directs the Political Work Department,” according to the website War on the Rocks.

The Diplomat reported that under the Three Warfares doctrine, the CCP creates “cognitive maps” that then “guide the direction and character of tailored influence operations, including conversion, exploitation, or subversion.”

Among the groups behind the CCP’s subversion of elite circles is the Committee of 100. Epoch Times columnist Trevor Loudon said the group “regularly sends delegations of American journalists to China and facilitates meetings with high-level government and business leaders.”

Chinese consulates also engage in direct pressure on U.S. politicians, and The Epoch Times has documented cases in which U.S. representatives have received calls from the CCP, which attempts to pressure them over their stances on the Chinese regime’s human-rights abuses.

“Driven by its political goals, Chinese influence operations are a centerpiece of the PRC’s overall foreign policy and military strategy,” it states.

The Washington Free Beacon reported, “China has enfolded many former U.S. officials as part of its lobbying efforts and influence operations. Gertz said China has used coercive measures on Americans to serve its own interests.”

Gertz said in the story that the CCP’s efforts “have literally changed the direction of American foreign policy toward China.”

The Project 2049 Institute detailed the CCP’s political-warfare operations in an October 2013 report, stating, “Political warfare is a critical component of Chinese security strategy and foreign policy.”

On the significance of this, it states, “Political warfare seeks to influence emotions, motives, objective reasoning, and behavior of foreign governments, organizations, groups, and individuals in a manner favorable to one’s own political-military objectives.”