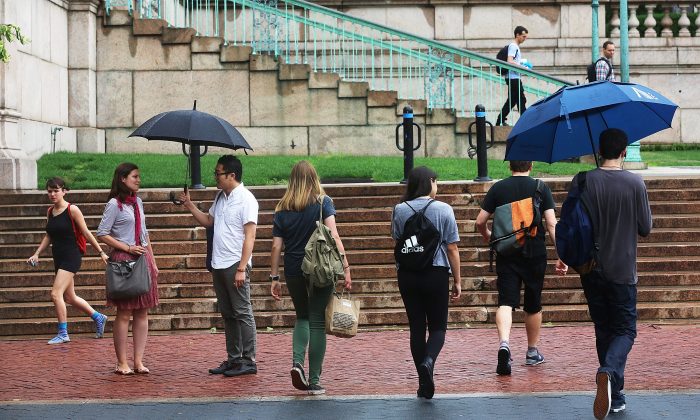 You could have one spy steal 10,000 documents, or you could have 10,000 spies each steal one document. (Mario Tama/Getty Images)
US-China Relations

Intelligence agencies around the world typically regard China’s approach to spying as sloppy and unprofessional. While many other countries focus on stealth and finesse for espionage, China’s focus is on mass numbers.

While regarded as unprofessional, China’s approach has also been extremely effective. The challenge posed by China comes down to a simple fact: it has too many spies for foreign intelligence agencies to keep track of.

“Our nation is overwhelmed. The problem is too big,” said Paul Williams in a phone interview. Williams is chief information officer at BlackOps Partners Corporation, which does counterintelligence and protection of trade secrets and competitive advantage for Fortune 500 companies.

Student spies—often college kids—play a fundamental role in this system. They help bolster a system of espionage where each person does a small share of the work. It’s based on the idea that you could have one spy steal 10,000 documents, or you could have 10,000 spies each steal one document.

By taking the approach of mass numbers for espionage, the Chinese regime has U.S. intelligence agencies outnumbered. In terms of both keeping tabs on their activities, and prosecuting Chinese spies, the United States can’t keep up.

The idea behind recruiting students as spies, according to Williams, is “if you can groom them in college” then they can be used to gain access to research at universities. After college, he added, “You can pick those students then follow their careers into corporate America.”

The Chinese regime can work spies recruited in college into positions in research, government agencies, or U.S. companies.

According to Williams many Chinese spies are not official spies. “Yes, you have those hardcore Chinese spies, but those are usually the minority,” he said. “The majority are just people who get asked to do something on the side.”

According to sources, the grooming process typically takes place before the students leave to study abroad. They may get approached by Chinese security officials who remind them to remain loyal to the motherland, and ask them to report back with anything that could benefit China.

For them, spying is often viewed as a matter of patriotic duty.

Williams said the approach typically works because the Chinese spy agencies don’t ask the students for much. The individual contribution, he noted, is often so minuscule that many may not even think of what they’re doing as espionage.

Spies of a Different Type

It’s because of China’s broad-brush approach to espionage that Chinese spies are typically regarded as sloppy and careless by other security agencies.

With China, the rules are different. “They just lie if they get caught,” Williams said. “It’s surprising how few precautions they take and how many risks they take.”

He added, however, that the approach has been shockingly effective. “The Chinese are getting everything,” he said.

“What makes it even harder is that you’re not sure what they got,” he said, noting that China’s approach of mass spying means they often get the same documents multiple times.

“It’s a very complicated network,” said Lu Dong, a former Chinese agent of influence in New York who is now an outspoken critic of the Chinese regime.

Lu said, “They only send the high ranking spies,” and noted that the 3rd Department has upward of 200,000 personnel.

China’s military spy hackers, Unit 61398, are under the 3rd Department’s 2nd Bureau, according to a report from security company Mandiant.

The United States isn’t alone in its dilemma of how to defend against China’s mass approach to spying. A similar situation was recently reported in Australia.

China is running spy networks through student associations in Australian universities. These networks are then spying on other Chinese students, pressuring them, and joining activities to defend the Chinese regime’s interests.

News of the spy networks is circulating through some of Australia’s leading newspapers, after The Sydney Morning Herald broke the story.

It reported that Australian spy agencies can’t keep up with the number of Chinese spies, and the Australian government is increasing its counterintelligence capabilities in light of the issue.

The spies are not only used for stealing information, however. They’re also used to keep tabs on individuals critical of the Chinese regime.

Such incidents, it reported, are common in Australian universities where Chinese students and professors need to be careful what they say.

Chen Yonglin, a former Chinese diplomat at the Chinese Consulate in Sydney, told Epoch Times when he defected in 2005 there were more than 1,000 Chinese secret agents operating in Australia, alone.

If Chen’s estimates are true, then consider the situation in the United States, which has more than 14 times the population of Australia and much more military and commercial data to pique the interests of China’s spy army.

“There are so many assets of the Chinese here, there is such a large number,” Williams said. “No other spy agency on the planet has anything even close.”

Chen, who himself had participated in China’s spy operations in Australia, told The Sydney Morning Herald that student spies were “useful for welcoming leaders at airports and blocking protest groups from sight, and also collecting information.”

When Chen defected, he brought secret documents with him. One of the documents was a to-do list for the consulate, and detailed how the consulate used its student spy networks to carry out the Chinese regime’s orders overseas.

Among the other roles carried out by the Chinese Consulate in Sydney, according to the leaked documents, were bribing Chinese media, recruiting new students to join its spy networks, and infiltrating Western politics.

Of course, China isn’t just interested in Chinese students for its spy operations.

In April, the FBI started a public information campaign warning U.S. students traveling abroad to be wary of intelligence networks interested in recruiting them as spies.

The FBI released a video telling the story of Glenn Shriver, an American student who was recruited by Chinese spies while studying in Shanghai. He was later caught and sentenced to four years in prison in 2011 after his spy handlers tried getting him into the CIA.

As the FBI pointed out in its educational materials, students studying abroad are prime candidates for positions in government and in large companies. The intelligence agents of China and other nations target students for this reason.

Chinese intelligence agencies want the students to become their insiders in government and in large companies—particularly those with government contracts. The spying operations that reel people in like this are called “seeding operations.”

“To foster the relationship, foreign intelligence operatives will flatter and encourage students, show interest in their future success, and even promise to help them obtain a government-issued visa or work permit—but it’s all disingenuous and empty promises,” said Mollie Halpern, at the FBI Office of Public Affairs in an FBI podcast.

Halpern said, “The truth is, the operatives are just using the student as a pawn to achieve their own ends, without concern for the student’s welfare or future.”