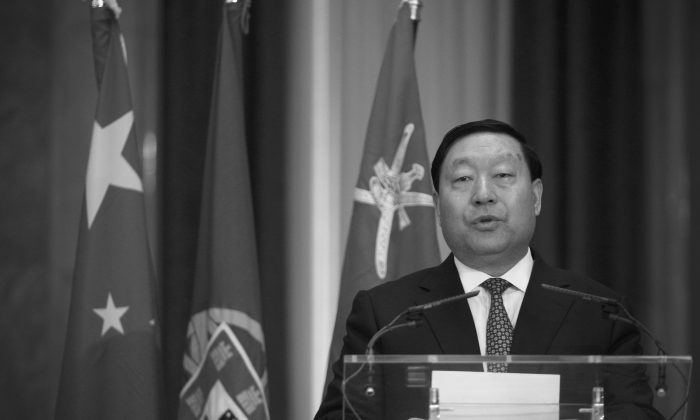 Liu Zhenya, Chairman of State Grid Corporation of China. Liu recently came clean about how much he made per month, in an attempt to show he was not corrupt. (AP Photo/ Francisco Seco)
China

The Communist Party’s ongoing anti-corruption campaign appears to have Chinese state-owned company executives spooked: a range of officials that head up multibillion dollar behemoths have taken to the press recently to boast about their voluntary salary reductions, in an apparent attempt to stop antigraft investigators from coming knocking.

In February, the Central Commission for Discipline Inspection, the Party’s anti-corruption arm, announced that it had targeted 26 state-owned companies for a new round of inspection, since the campaign started in 2010.

In some cases, such as with China Unicom, one of the largest telecommunications firms in China, investigators took over a floor of the building and poured through the company’s books. They also solicited confessions from underlings, discovering dirt on the bosses that were later unceremoniously sacked from the company and expelled from the Communist Party. The regime often uses Party members to head up state companies, and rotates them on a regular basis.

“After taking a pay cut, my monthly salary now is just 8,000 yuan per month.”
— Zhou Zhongshu, President of China Minerals

To curb corruption, a reform was put in place by the Chinese authorities to cut hefty salaries of executives working at large state-owned companies last year, which would be enacted further this year.

A director of the anti-corruption committee indicated that he meant business, in an interview with Chinese newspaper Chengdu Economic Daily on March 6.

“Whoever we want to talk to, nobody dares stand in our way,” said Ling as he commented about the committee’s tactics for going after corrupt executives. Ling said, investigators are able to have easy access to talk with high-ranking party officials, retired employees, and civilians.

In China, nearly all state-owned companies are protected by former high-ranking Chinese officials. And talking to such political heavyweights is usually not easy, given that China’s privileged class usually override the rule of law.

On the same day as Ling’s interview, anti-corruption agents showed up at the 26 state-owned companies it had identified earlier for inspection, reported the Chinese regime’s mouthpiece, Xinhua News Agency.

The next day, Liu Zhenya, a representative to the Chinese People’s Political Consultative Conference, the advisory body to the Chinese Communist Party, who is also the Chairman of State Grid Corporation of China, said he took the lead in cutting his own salary in accordance with the reform when investigators showed up.

“I don’t mind at all because I’ve had a big paycheck the past several years,” said Liu. “Even if I would not be paid at all for the next two years, my life wouldn’t be affected much.”

Two other heads of state-companies, also among the 26 targeted, followed suit by announcing their salaries.

“After taking a pay cut, my monthly salary now is just 8,000 yuan (about $1,278 per month),” said Zhou Zhongshu, President of China Minerals.

So far, the results of the anti-corruption investigation into state-run companies was exposed on March 13.  The Procurator-General of the Supreme People’s Procuratorate, Cao Jianming, said that a total of 6,158 people were found guilty of committing crimes last year, reported Sina, a major Chinese news portal, on March 12.