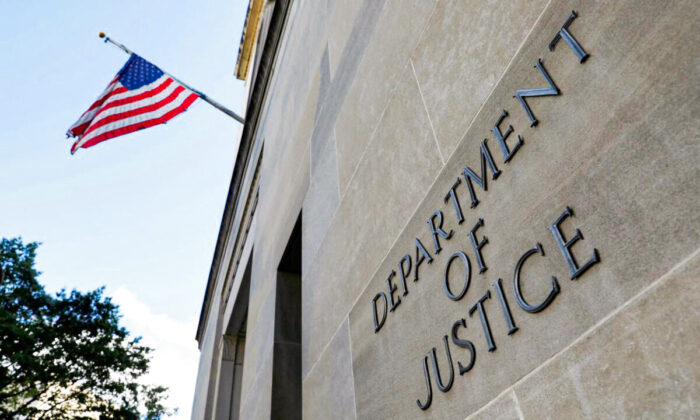 Signage is seen at the United States Department of Justice headquarters in Washington, on Aug. 29, 2020. (Andrew Kelly/Reuters)
By Andrew Thornebrooke

Chinese secret police and their agents are stalking, harassing, intimidating, and conspiring to commit violence against pro-democracy activists and Chinese dissidents on U.S. soil, according to three new criminal cases unsealed by the Department of Justice (DOJ) on March 16.

The efforts include a plot to interfere in a Congressional election, covert attempts to arrest enemies of the Chinese Communist Party, and surveillance operations to spy on anti-communist activists.

“These cases expose attempts by the government of the People’s Republic of China [PRC] to suppress dissenting voices within the United States,” said Assistant Attorney General for National Security Matthew Olsen during a press conference, referring to the Chinese regime’s official name.

“They demonstrate how the PRC seeks to stalk, intimidate, and silence those who oppose them.”

Five individuals were charged in relation to schemes to harass and spy on ethnic Chinese in the United States critical of the communist regime.

An Alleged Plot Against a Congressional Candidate

In one of the cases, federal prosecutors said that Lin Qiming, an alleged Chinese agent, contracted a private investigator (PI) in New York to manufacture a political scandal in the hopes of undermining the Congressional campaign of Yan Xiong, who is currently seeking the Democratic nomination to run for Congress representing a district in Long Island.

Yan is a naturalized American citizen and Army veteran who served two tours in Iraq. He has long been a target of the Chinese Communist Party (CCP) for his participation as a student leader in the 1989 Tiananmen Square protests and for his later support of pro-democracy protests in Hong Kong.

Lin’s arrest warrant details his efforts to use a private investigator to implicate Yan in prostitution, tax evasion, and possession of child pornography. Failing that, Lin encouraged the PI to physically harm Yan by either beating him or forcing him into a car accident.

“If you don’t find anything after following him for a few weeks, can we manufacture something,” Lin said in one recorded call, according to the court document.

“But in the end, violence would be fine too,” Lin said in a voice message. “Beat him. Beat him until he cannot run for election.”

Lin also suggested that the PI hire an attractive woman to become a volunteer for Yan and then implicate him in prostitution. When the PI told Lin it would cost $40,000 to carry out the job, Lin responded, “No problem. The money is not a problem.”

Lin further encouraged the PI to use “cops, or lawyers, or the courts” to put pressure on Yan and said, “We will have a lot more of this in the future,” according to the court filing. He added, “Right now we don’t want him to be elected.”

Despite assuring the PI that money was not an issue, however, the CCP’s bureaucracy apparently interfered with the effort, and Lin later told the PI he couldn’t get the $40,000, the court document said.

“Because the Communist Party, as you know,” Lin said, “it’s not just one person who can call the shots.”

In another case, spanning from January 2021 to March 2022, Liu Fan, Matthew Ziburis, and Sun Qiang allegedly conducted a campaign of harassment and intimidation against Chinese dissidents and pro-democracy activists living in America, according to the Justice Department.

The campaign involved gathering derogatory information on dissidents in order to humiliate or otherwise discredit them in the eyes of the public.

Like the Lin case, those involved allegedly relied on private investigators whom they hired to stalk, surveil, and intimidate ethnic Chinese living in America, ultimately spending over $100,000 in the process.

The scheme, the DOJ said, included attempted bribes to Internal Revenue Service officials in order to obtain dissidents’ tax information, and a conspiracy to destroy a sculpture that depicted Chinese Communist Party leader Xi Jinping as a coronavirus molecule.

In one instance, the defendants conspired to use Liu’s business, a New York-based media corporation, to gain access to interviews with tags while posing as journalists, according to court documents.

In one message, Liu told the others to say they were employed by “a very rich Jewish man [and] head of [the] Jewish community,” the court filing said, and told them to imply that this fictitious Jewish man was a large donor to House Speaker Nancy Pelosi’s political campaigns.

The DOJ’s third case alleged that Wang Shujun, a naturalized U.S. citizen and former visiting scholar, compiled information on pro-democracy activists and Chinese dissidents living in the United States and disseminated it to the MSS.

According to the case file, Wang, 73, was a long-time member of the Hu Yaobang and Zhao Ziyang Memorial Foundation, a pro-democracy group based in Queens, New York.

From January 2016 through August 2021, however, Wang is alleged to have secretly operated as a CCP agent, using his position in the foundation to collect private information on activists which he then delivered to his handlers in the Chinese regime.

At least one person whose information Wang gave to the MSS was later arrested by the CCP when traveling to Hong Kong, according to prosecutors.

The three cases come just a month after the Biden Administration’s decision to terminate the Trump-era “China Initiative,” an anti-espionage campaign that critics accused of racially profiling Chinese Americans.

Olsen said that the new cases were part of the Justice Department’s new nation-state-oriented approach, and that the department would defend the nation against repressive efforts by the Chinese communist regime to violate America’s sovereignty.

“For the Justice Department, defending American institutions and values against these threats is a national security imperative,” Olsen said. “Transnational repression is part of the range of tactics that our adversaries employ to try to undermine our democracy, our economy, and our institutions.

“This activity is antithetical to American values. We will not tolerate such repression here when it violates our laws.”

Likewise, Breon Peace, U.S. Attorney for the Eastern District of New York, noted that each of the new cases dealt with efforts by the Chinese regime to explicitly target supporters of democracy, and especially ethnic Chinese who were critical of the communist regime that currently rules the mainland.

“All of these victims were targeted because of their pro-democracy views, because they chose to exercise their freedom of speech here in the United States,” Peace said.

“The complaints unsealed today reveal the outrageous and dangerous lengths to which the PRC government’s secret police and these defendants have gone to attack the rule of law and freedom in New York City and elsewhere in the United States.”

Three of the defendants were arrested over the past two days, while Sun and Lin remain at large.