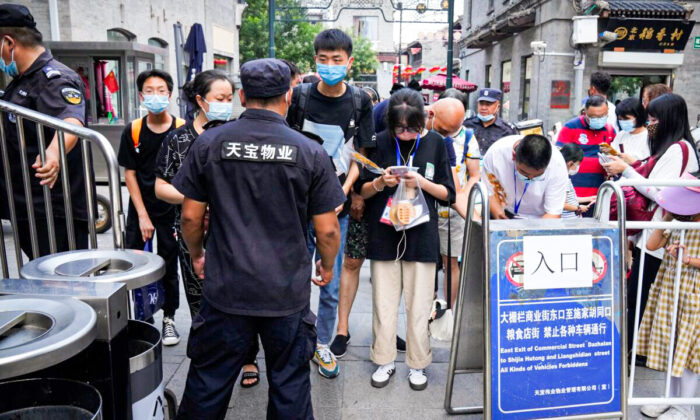 The Chinese regime is using the COVID-19 “health code” for pandemic control and as a means for social control. Recently, several rights lawyers and legal experts have revealed that their health codes suddenly changed from green to red without any reason. They could not travel freely and were put in forced quarantine.

The Chinese communist regime adopted a health code—QR code system on cellphones—to track and monitor the whereabouts of people. The system issues green, yellow, and red codes based on their digital footprints within the past 14 days. People must have a green code to go to public places and for travel.

Chinese rights lawyer Xie Yang from Changsha told the Chinese language edition of The Epoch Times on Nov. 19 that he was on his way to visit the mother of jailed journalist Zhang Zhan in Shanghai on Nov. 6. The Chinese regime’s national security in Changsha asked him to cancel his trip on Nov. 5, but he refused. When he got to the Changsha Airport on Nov. 6, his health code suddenly changed from green to red, which means forced quarantine.

Xie said that he feared that they would take him to an unknown location for forced quarantine, so he ran out of the airport and jumped into a taxi to go home.

Later, he received a call from the staff of the Changsha Center for Disease Control and Prevention, asking him about his health code. “I angrily scolded them, saying this was the national security people’s doing. I have not been anywhere within the past 14 days, nor have I been to a medium to high risk area. This is blatant persecution … They can see clearly my whereabouts from their big data.”

He said the epidemic prevention staff in the community then came to his home to do a nucleic acid test on him. “They want to find an excuse for themselves.” On Nov. 7, his health code changed back to green.

According to Xie, the ruling Chinese Communist Party (CCP) has found a new means to suppress dissidents under the guise of pandemic control. “They only need to do a little trick with the health code … then they can control a person’s movements.”

Another Chinese human rights lawyer Wang Yu was similarly blocked from returning to Beijing during the CCP’s party conclave until Nov. 16. She told the Chinese Epoch Times on Nov. 17 that when she was on a business trip to Mudanjiang city in Heilongjiang Province, her health code showed she had visited a pandemic area—although Mudanjiang is not. Her health code turned back to green when the party conclave finished and then she was allowed to return to Beijing.

Wang said, “This incident happened during the Sixth Plenary Session of the CCP and is done primarily to maintain stability for the regime, and restrain human rights activists’ movements—[it’s] now done based on the pandemic to control people’s freedom.”

Similar situations have happened to other Chinese lawyers as well.

Mainland Chinese media Jinan Daily reported that Sichuan lawyer Liu Jianyong’s health code suddenly turned red from green when he was working on a case in Xi’an city in Shaanxi Province. Liu was almost put into forced quarantine. Liu asked the Xi’an pandemic control personnel for legal documents and threatened to sue the Shaanxi Provincial Government. The epidemic prevention personnel eventually let him get on a train and return to Chengdu.

Mainland legal scholar Chen Hongguo revealed on his Chinese social media WeChat account that on Nov. 11, he took the high-speed rail from Yuncheng in Shanxi Province to Xi’an. After getting off the train, his health code changed to yellow and showed that he had been to the Philippines within 14 days, despite him never leaving the country. He was sent home for forced isolation by pandemic control staff. The next day, after he filed a complaint, his code turned back to green and the travel record to the Philippines was deleted.

Hong Ning and Gu Qing’er contributed to the report.