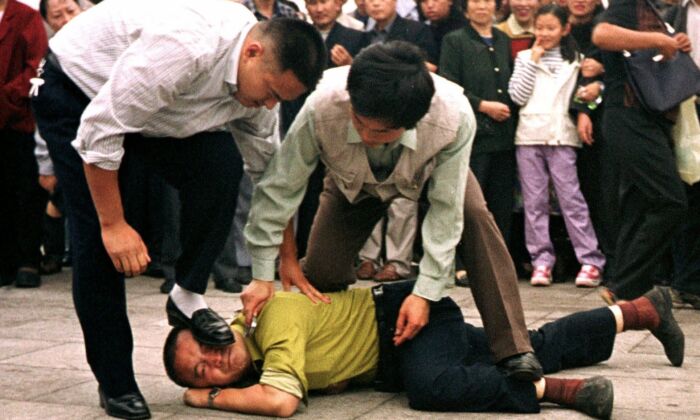 Police detain a Falun Gong protester in Tiananmen Square as a crowd watches in Beijing on Oct. 1, 2000. (Chien-min Chung/AP Photo)

The Chinese regime has been raiding the homes of Falun Gong practitioners and detaining them throughout the country during the month of June, ahead of the ruling party’s upcoming 100-year anniversary celebration on July 1.

The Chinese Communist Party (CCP) will celebrate the centennial of its founding next month. In order to “maintain social stability”—terminology used by the regime to justify its totalitarian rule—the CCP announced a series of strict controls on the Chinese people in June, particularly in Beijing.

Practitioners of Falun Gong—a traditional spiritual practice that teaches the values of truthfulness, compassion, and tolerance—have been among those targeted by the regime.

Since June 1, reports have emerged of practitioners’ homes being raided by local police. Their private property has been seized, and some police have even detained nonpractitioner family members.

“We condemn all forms of the CCP’s persecution [on Falun Gong practitioners],” Zhang Erping, spokesperson for the Falun Dafa Information Center in New York, told The Epoch Times on June 17.

“The CCP’s persecution has been ongoing since July 1999. There is no indication thus far of any policy change from the CCP, and we continue to witness the ruthless campaign of persecution against Falun Gong practitioners in China. We continue to call on people of good conscience around the world to speak up against the CCP’s violence on Falun Gong.”

On June 10, the Mudanjiang Municipal Police Department in northeastern China’s Heilongjiang Province ordered police from across the city’s six counties and four districts to arrest Falun Gong practitioners from their homes.

The regime said the arrests were part of a campaign it has named “Safety July 1.”

In a 36-hour period, police detained 28 Falun Gong practitioners in the city; harassed another six practitioners; and seized cellphones, computers, printers, books, cash, and even bank cards from practitioners’ homes, reported Minghui.org, a website dedicated to documenting the persecution in China.

At 8 a.m., policemen from Aimin district hired a locksmith and broke into the house of practitioner Chen Yanwei when Chen and her family were at home. They detained Chen and her sister Chen Yanfu.

In some cases, the police even used pepper spray on practitioners as they tried to protect their belongings.

Minghui.org also reported on similar arrests happening in the cities of Beijing and Tianjin, as well as in Sichuan, Guangdong, Gansu, Hebei, Yunnan, and about a dozen other provinces.

The Chinese regime launched its brutal persecution to eradicate Falun Gong in July 1999, and it’s estimated that millions of practitioners have been detained, tortured, and killed over the past 22 years.

Regime officials believe they need to escalate the persecution during the centennial to safeguard their power, according to Tang Jingyuan, U.S.-based China affairs commentator.

“The CCP regime has detained Falun Gong practitioners, petitioners, democracy activists, and even ultra-leftists who they don’t trust ahead of the centenary,” he told The Epoch Times on June 17. “It’s because Chinese leader Xi Jinping and the Beijing authorities are scared to lose power.”

Tang said the regime wants to consolidate its dictatorship, and Xi eagerly wishes to hold onto his totalitarian position.

“In the past decades, Falun Gong practitioners have revealed the persecutions that they suffered in China, and exposed the crimes the CCP committed when faced with calls to end the persecution, inside and outside of China. This scares the CCP,” Tang said.