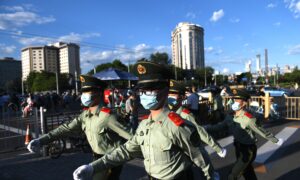 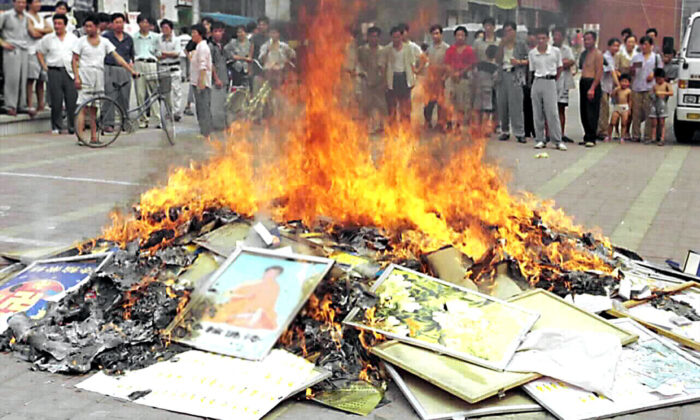 Falun Gong books and pictures are set on fire in Shouguang City, in China's Shandong Province, on Aug. 4, 1999. Chinese authorities in cities across China burned millions of Falun Gong books and materials after the communist regime launched a campaign to persecute the spiritual practice in July 1999. (STR/XINHUA/AFP via Getty Images)
China Human Rights

The Chinese Communist Party has kept up its broad attack on faith amid the COVID-19 pandemic, burning and trashing religious books while jailing spiritual adherents for possessing religious literature.

At least 100 million people—or about a third of believers in China—faced “high” or “very high” levels of persecution in 2017, according to estimates by the human rights advocacy group Freedom House estimated. Their plight has continued to worsen, the group found last year.

For the believers—Tibetan Buddhists, Christians, Uyghur Muslims, or Falun Gong practitioners—reading, printing, or distributing religious materials could lead to jail terms, harsh labor, and other forms of abuse. Many are subject to routine monitoring and harassment by state agents, who often raid their homes without warning to seize and destroy their books.

These violations of religious freedom have led the U.S. State Department to designate the Chinese regime as a “country of particular concern” annually for more than two decades.

The repressive policies have only intensified in recent years. In 2016, the regime passed a regulation explicitly banning its roughly 90 million Party members from having religious beliefs, engaging in “feudal superstitious” activities, or supporting religious extremists or racial separatists—the latter is a term it frequently evokes to describe religious minorities such as Muslim practicing Uyghurs in Xinjiang or Tibetan Buddhists.

That occurs even as the Chinese Constitution guarantees its citizens rights to “freedom of religious belief” and to engage in “normal religious activities.”

The regime has frequently expressed its aversion to spirituality through Party-owned media and in government documents.

Just days ago, Beijing, in a top policy directive, listed promoting socialism and purging “superstition” among its top priorities for modernizing the country.

CCP members, who have chosen to follow the materialistic path decreed by the Party, are as “incompatible with superstitious ideologies as fire and water,” one state-controlled publication declared in 2016.

In October 2019, a state library in Zhengyuan county of northwest China’s Gansu Province was criticized for conducting a public book-burning of dozens of illegal publications or media with religious or “tendentious” content. Netizens compared the scene to the days of the Cultural Revolution, where books were burned and religious artifacts smashed, as the CCP attempted to stamp out traditional Chinese culture and tighten its ideological control over the population.

But the library’s action was hardly an isolated incident.

Roughly two decades after the Cultural Revolution, in 1999, the CCP ordered a massive campaign to eradicate Falun Gong, a spiritual meditative discipline based on moral principles of truthfulness, compassion, and forbearance. Overnight, an estimated 70 million to 100 million Falun Gong adherents in the country were labeled as enemies of the state, facing detention, torture, harassment, and forced organ harvesting if they refused to renounce their belief.

Soon, Falun Gong practitioners were forced to hand over their books and videotapes relating to the practice. Those materials were then crushed under a pulping machine, road roller, or set on fire, often in public displays that were later used for propaganda purposes.

Millions of publications were destroyed, according to Minghui, a U.S-based website that tracks the persecution of Falun Gong, which based its estimate on reports by foreign journalists, state media, and eyewitness accounts.

A July 2019 notice, posted on the government website of Xilingol League in the region of Inner Mongolia, offered monetary rewards varying from 50 to 500 yuan ($7.73 to $77.30) for anyone who reported flyers, books, souvenirs, social media posts, or banners related to Falun Gong and other groups that the CCP deemed illegal. It also offered up to 300,000 yuan ($46,392) for clues to “dismantle” them.

While Buddhism and Christianity are officially sanctioned religions, their adherents haven’t been shielded from state pressure. In Jingdezhen County of Jiangxi Province, a Buddhist abbot recalled how the local government laid all of the local temples’ CDs in the road, and used an excavator to crush them, according to a December report by Bitter Winter, a magazine on China’s religious liberty and human rights. Last October, officials in the northern province of Shanxi shut the local Fengci Temple and confiscated around 882 pounds of religious books and tens of thousands of CDs, according to the same article.

In Anhui Province, at least 250 state-sanctioned churches had their crosses removed between January and April 2020, often on the pretext of “being too tall, too large, too wide, or too eye-catching,” the magazine reported. Officials claimed the action was part of a broad campaign to eliminate religious symbols.

Wen Weiquan, a house Christian from the Wufeng Tujia Autonomous County in Hubei Province, took his own life in February 2019 after police forced him to hand over his Bible and throw crosses that had been in his house into a fire pit.

“The Chinese Communist leader Xi Jinping and his regime engineered the worst religious persecution since the end of Chairman Mao’s Cultural Revolution in the 1960s,” Bob Fu, a Chinese American pastor and founder of U.S.-based Christian nonprofit China Aid, told The Epoch Times in an email.

The regime’s sweeping religious policies have continued amid the pandemic, as China’s faithful continue to suffer government reprisal for the mere act of holding, producing, or circulating materials related to their beliefs.

“Xi’s regime constantly uses the pandemic as a pretext for further crackdown against any independent faith or religion in China,” Fu said.

He pointed to the suspension of virtual worship services at a house church in Sichuan, and the case of Pastor Li Juncai in Henan Province, who received a five and a half year sentence in January for attempting to prevent a CCP flag and propaganda banners from being placed in his church.

Chen Yu, owner of an online Christian bookstore in Taizhou City in Zhejiang Province, was sentenced to seven years in prison in October 2020 and fined 200,000 yuan ($29,450). His customers from three provinces reported raids of their homes by police who seized their religious books. Yu was charged with selling unapproved religious books imported from other countries.

Last September, a Shanghai court sentenced 16 people for operating an “illegal” business that printed more than 200,000 religious-themed books without a license, including the Buddhist scripture “Diamond Sutra.”

In December last year, Falun Gong practitioner Guo Suling, who was 77 years old at the time, was handed a three-year suspended sentence for allegedly hanging three Falun Gong banners in public locations, while Sun Qian, an adherent who holds a Canadian passport, was sentenced to eight years in prison last June. The police arrested Sun after raiding her Beijing home and finding Falun Gong books.

Another practitioner, Sun Zhongqin, from Liaoning Province, was sentenced to three and a half years in prison in November for distributing calendars and booklets related to Falun Gong, according to Minghui.

Not wishing their books to fall into authorities’ hands, some Kazakh Muslims in the far-western Xinjiang region sealed their Qurans in plastic bags and threw them into the Ile River, in hopes that they could be transported to neighboring Kazakhstan and be preserved, Radio Free Asia reported in October 2020.

To evade internet censorship, two government-approved Christian groups replaced religious terms with shorthand in their online bookstore, such as by changing “Christ”—pronounced as “Ji Du” in Chinese—into “JD,” and “Bible” into “SJ,” the short form of the term in Chinese “Sheng Jing,” according to China Aid.

“This is a war against decent faith,” Fu says. “History has told us this war is doomed to fail.”