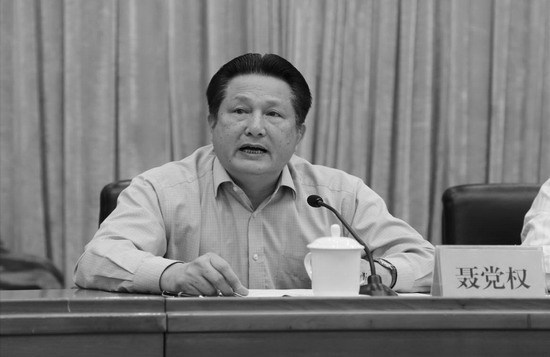 According to an April 5 report by the Chinese regime’s anti-corruption agency, Nie Dangguan, a former deputy mayor of Jiangmen, has been expelled from the Chinese Communist Party. (Sina)
China

Nie Dangguan, a provincial political heavyweight in southern China, has been expelled from the Chinese Communist Party and removed from public office, according to an April 5 notice on the website of the Party’s internal investigative agency.

The public charges against Nie are typical: embezzling state funds, illegally enriching his compadres, visiting prostitutes, and other acts of malfeasance. But these charges also conceal what are much more serious crimes: his supervisory role in ordering the torture and forced labor of practitioners of Falun Gong, a traditional Chinese spiritual discipline.

Nie was formerly the deputy mayor, deputy Party secretary, and head of the local Political and Legal Affairs Commission (PLAC) of Jiangmen, a city in Guangdong Province.

According to the World Organization to Investigate the Persecution of Falun Gong (WOIPFG), a network of volunteer researchers, Nie, being the chief of Jiangmen’s security apparatus, is directly responsible for brutally persecuting two practitioners of Falun Gong.

The PLAC controls the Chinese regime’s secret police, regular police, judiciary, and prison system, and is able to order the arbitrary arrest, forced labor, and torture of any individuals deemed a threat to the regime.

Falun Gong was declared an enemy of the Communist Party in 1999, after years of tacit support by the regime. But after the traditional discipline of self-cultivation—which includes the performance of slow exercises and living by the teachings of truthfulness, compassion, and tolerance—got too popular, it became a target for elimination by the Party leader at the time, Jiang Zemin.

Party organizations like the PLAC that Nie Dangquan was in charge of had ordered some of the darkest aspects of the persecution.

In October 2012, Jiangmen residents and practitioners of Falun Gong Feng Qifeng and Li Aiqun were incarcerated for practicing Falun Gong and were subject to forced labor and brutal torture.

Feng, a former employee of the China branch of Dascom, an international printing, telecommunications, and lighting company, and Li, a retiree, had been arrested by officers from the local 610 Office—an extralegal organization under the PLAC that was created specifically to persecute Falun Gong—and placed in the Jiangmen Detention Center without trial or formal investigations, according to Minghui.org, a website that serves as a clearinghouse of information about the persecution.

While imprisoned, Feng and Li were forced to make plastic flowers and cosmetic masks from 7:00 a.m. in the morning until 11:30 p.m. at night. Assembling the plastic flowers is a torturous process: “Blood and glue mix, and the pain is unbearable. The skin peels, then heals, but breaks again because of the work.”

If workers in Jiangmen Detention Center failed to meet their daily quota for three days straight, they were forced to stand absolutely still for three hours. If they refused to work, they were tied to a bed for a whole day and denied use of the toilet.

On Dec. 9, 2013, a court in Jiangmen, in cooperation with the 610 Office, sentenced Li and Feng to eight and three years in prison respectively, failing to inform either of their family members or lawyers, according to Minghui.

Feng was released from Sihui Prison in Guangdong on Oct. 22, 2015. Li’s whereabouts are currently unknown.