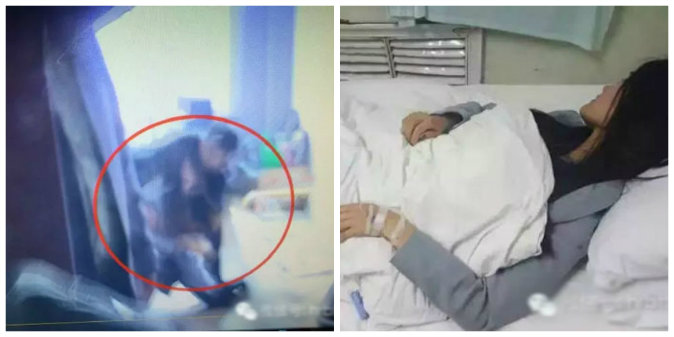 Cao Yang, a reporter with Harbin TV, was beaten by police chief Li Changhong inside a police station on April 14; Cao was hospitalized on April 10. (The Paper)
China

A television journalist in northeast China looking to report on the mediation of a high-profile contract dispute at a police station instead found herself beaten up by the police and hospitalized for treatment.

On April 14, Cao Yang, a reporter with state-run broadcaster Harbin TV, and two of her colleagues—intern reporter Xiao Hong and cameraman Jiang Peng—visited Neilugang Police Station in the city of Harbin in Heilongjiang Province to learn the outcome of the local police’s attempt to resolve a long-standing contract disagreement between a high-speed railway repair company and a shipping company that transported its equipment.

Neilugang police chief Li Changhong allowed Cao to sit in the closed-door mediation discussions in his office on two conditions—Cao couldn’t record the discussions on video, and her two other colleagues had to wait outside the door. She agreed to the conditions, and was let in.

Moments later, Cao’s screams of help issued from the police chief’s office. Video footage by Harbin TV showed her colleagues frantically pounding on the door before two police officers opened the door. During the brief seconds that the door was ajar, Li the police chief could be seen pressing Cao to the floor before the other police officers blocked the camera and shut the door.

In trying to rescue their colleague from the police, Xiao Hong the intern reporter and cameraman Jiang Peng found themselves in a Kafkaesque situation.

“The police station says you’re in its jurisdiction,” the operator of the emergency hotline 110 told Xiao when she called. “So even if the police are sent your way, the officers will be from this station. And since you claim that you’ve been assaulted at this police station, only the police superintendent or the local discipline inspection committee can intervene.”

The police superintendent of Harbin is stationed at the local Public Security Bureau headquarters. The discipline inspection committee is the Communist Party’s secret internal investigation agency.

A call to the local discipline inspection committee also proved unhelpful. “Didn’t you say you wouldn’t be recording? So in this situation, there’s a dispute. Why don’t you all just talk it out?”

Police chief Li Changhong has since been dismissed from his post, according to an April 22 Radio Free Asia (RFA). But by law, Li should have instead been placed in detention, Beijing lawyer Li Jinglin told RFA.

“If administrative punishment was followed, he should have been fired,” lawyer Li explained. “In other words, after the public outcry subsides in a few days, he will be back at work in a new position.”

According to Chinese news website The Paper, Li had caught Cao filming the discussions with her cellphone, and had beat her up before seizing the two cellphones she was carrying. Cao was later hospitalized for her injuries, but her current health condition is unclear.

In the discussion section of The Paper, netizens expressed outrage at Li’s brutality and the lack of response from other government officials.

“Are the two regular police officers being punished as well? They have all broken the law. The 110 emergency center simply brushed off the incident! And the discipline inspection official did nothing! I think all citizens need to deeply reflect on this incident,” wrote “ranlingzhi.”

Another netizen wrote: “Reporters play a supervisory role in public opinion. If they don’t make a recording, who can provide evidence when the police start lying?! Regardless of the circumstances, how can police officers, who should behave like gentlemen, simply beat up a powerless female reporter? Does having power mean that one can abuse the law?”