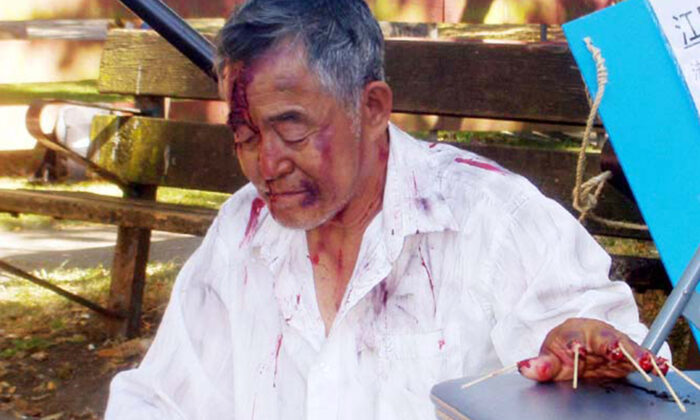 Reenactment of one of the many inhumane torture methods used by the Chinese Communist Party to persecute Falun Gong practitioners in China. (Minghui.org)
China Human Rights

This past weekend, some 100 million people worldwide celebrated their faith in the universal values of truthfulness, compassion, and tolerance, marking the 30th anniversary of Falun Gong’s introduction to the public. However, the adherents in China still remain at high risk of being persecuted.

In a disturbing incident, a 74-year-old Chinese man was arrested after police suddenly broke into his home, claiming they wanted to give him a COVID-19 vaccine. He was eventually detained for eight months and persecuted for his faith in Falun Gong before being reportedly declared dead while he was still alive, according to Minghui.org—an all-volunteer organization dedicated to reporting on the suppression of Falun Gong in China.

Liu Qingfei was arrested when police from the Liaozhong police bureau in Shenyang City, Liaoning Province, China, took him away on Aug. 28, 2021, without showing any search or arrest warrants. The officers raided his home and confiscated his personal belongings, including Falun Gong-related information materials that expose the Chinese Communist Party’s (CCP) persecution of the spiritual system.

On Aug. 29, a day after his arrest, Liu suffered a heart attack during the interrogation session at the police station and was “very weak and sweating,” according to the report. However, Liu’s arrest was approved several days later, on Sept. 10, 2021, which gave the authorities the official go-ahead to hold him at Liaozhong District Detention Center.

Falun Gong, also known as Falun Dafa, is a mind-body practice consisting of five sets of slow-moving meditative exercises and based on the moral tenets of truthfulness, compassion, and forbearance. By the year 1999, there were 70 million to 100 million people practicing Falun Gong in China, according to official estimates at the time; the count exceeded the CCP’s membership by many folds.

The CCP viewed the practice’s spiritual nature and moral influence as a threat to its iron-fist reign rooted in atheism, materialism, and struggle. Under the leadership of then-Party Chief Jiang Zemin, the communist regime went ahead to launch an unprecedented nationwide persecution campaign to eradicate the peaceful meditation system in July 1999.

Over the past almost 23 years, tens of thousands of Falun Gong practitioners have been subjected to abductions, imprisonment, and brutal torture, and countless have been killed for their organs.

Last month, on April 24, at 8:25 p.m., Liu’s family received a call from the Liaozhong District Detention Center, informing them that Liu had died after developing a “sudden, acute condition” and the hospital had tried to resuscitate him. However, upon arriving at the hospital, the family saw that Liu’s body was “still warm” and his eyes looked “still bright;” he didn’t look like a dead person. The family suspected that Liu might have been pronounced dead while he was still alive.

Outraged, they questioned the detention center about the foul play. They were told that Liu suffered an “acute condition” at 6:39 p.m, and 20 minutes were gone before an ambulance could arrive. According to the report, though Liu was pronounced dead at 7:08 p.m., the detention center guards waited for over an hour to inform the family. It couldn’t be verified who pronounced Liu dead, the report said.

Noticing the life-like gaze in his eyes and the warmth of his body, the family insisted doctors revive Liu, but it was too late.

The family is seeking justice, and they have kept Liu’s body in the funeral home, reported Minghui.org.