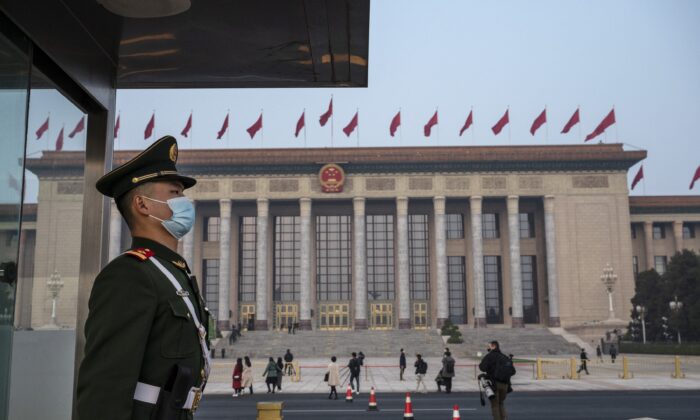 A police officer stands guard before the closing session of the Chinese People's Political Consultative Conference at the Great Hall of the People in Beijing, China, on March 10, 2022. (Kevin Frayer/Getty Images)

A recent report by the human rights nongovernmental organization Safeguard Defenders reveals that the Chinese police have adopted North Korea’s “three generations of punishment,” in which three generations of a political offender’s family can be imprisoned or executed even without having committed a crime themselves.

Similar to the concept of “guilt by association,” Chinese police use this form of punishment to target individuals deemed a threat to the regime.

It isn’t unheard of that the Chinese police use threats against a targeted individual’s loved ones, including children, spouses, or even parents. For example, they use that method to get rights defenders and activists to do what they demand, especially when torture isn’t enough.

However, new revelations expose a greater scope and systematic approach to such behavior. According to Safeguard Defenders, when the Chinese regime wants high-profile dissenters or exiles to return to China “voluntarily,” it not only detains or arrests them, but also even imprisons their innocent relatives.

The new report by Safeguard Defenders describes the massive increase in operations by Chinese police to “persuade” Chinese nationals abroad to return to China to face criminal charges. Chinese state media claim that 230,000 Chinese nationals returned through such “persuasion” between April 2021 and July 2022, the report states.

That figure is remarkable, especially during travel restrictions, particularly to and from China.

Most media reported on this data and the fact that Chinese police have established “overseas police service stations.” So far, 54 such stations have been uncovered in 30 countries, but the actual number could be higher. Safeguard Defenders found that in the service stations in Spain and Serbia, there are government documents revealing how these stations operate with Chinese police to track targeted individuals and assist in forcing them to return to China.

Moreover, Safeguard Defenders discovered a series of police and government notices and documents showing how far local police are instructed to “persuade” these targeted individuals to return to China. For example, the documents reveal that authorities pressure family members by preventing them from taking out loans, suspending their medical insurance, and confiscating their passports. Of all the methods, perhaps the most Orwellian in nature is the instruction that the police can deny a child’s right to an education.

Police officers have even admitted that some of those sought after haven’t actually committed any crime but are targeted nonetheless, and the same techniques outlined above are all fair play. It’s a remarkable development for a country that, for a while at least, pretended to try to develop something akin to a system of rules within its legal system.

In fact, one official notice makes it illegal for Chinese nationals to live in nine forbidden countries, including places such as Turkey, Thailand, and many other Southeast Asian countries, and that they must return to China, even if they aren’t accused of any wrongdoing.

The lawlessness within Chinese police enforcement is seemingly spreading, and instead of being limited to high-profile human rights defenders and critics, it’s now being used on a grander scale by local police, no matter the cost, to achieve their aim of greater control.

Is this what we can expect from China under Xi Jinping during his third term, a country entirely devoid of adherence to the law and the adoption of North Korean-style “guilt by association”? For a country that governs through fear, guilt by association might be one of the most potent tools—and things certainly aren’t looking bright for the near future.

Peter Dahlin
Peter Dahlin is the founder of the NGO Safeguard Defenders and the co-founder of the Beijing-based Chinese NGO China Action (2007–2016). He is the author of “Trial By Media,” and contributor to “The People’s Republic of the Disappeared.” He lived in Beijing from 2007, until detained and placed in a secret jail in 2016, subsequently deported and banned. Prior to living in China, he worked for the Swedish government with gender equality issues, and now lives in Madrid, Spain.