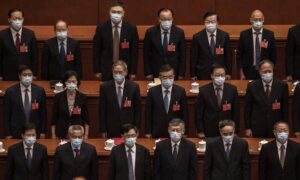 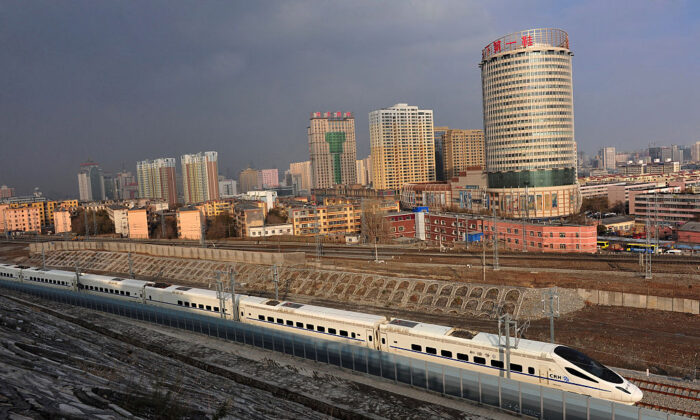 A CRH high-speed train runs across Urumqi city during its test run in Urumqi, the capital of China's Xinjiang region, on Nov. 11, 2014. (VCG/VCG via Getty Images)
INSIDE CHINA

The severity of the latest CCP virus outbreak in Urumqi, the capital of western China’s Xinjiang region, is under scrutiny as local authorities have taken draconian measures to contain the virus.

Local health authorities in Urumqi said during a press conference on July 18 that there were a total of 17 confirmed virus cases in the city as of noon that day, in addition to 23 asymptomatic cases. Chinese authorities count asymptomatic carriers in a separate tally.

By the morning of July 19, the local health commission reported on its website 13 new confirmed cases and 18 new asymptomatic cases between July 18 noon and midnight. About 2,705 people were put under medical observation.

But the way Chinese authorities were quick to implement lockdown measures, and a subtle change to a recent article published by China’s state-run media People’s Daily suggest that the outbreak in Urumqi is more severe than authorities are admitting.

The current outbreak in Urumqi officially started on July 15, when a 24-year-old woman, a resident in Urumqi’s Tianshan District, tested positive for the CCP (Chinese Communist Party) virus, commonly known as the novel coronavirus. She worked for a shopping center at Zhongquan Square in Tianshan.

The woman was taken to a local hospital on July 10, after exhibiting symptoms including a sore throat. Four days later, the woman began having a fever and headache. Three people who came in contact with the woman were subsequently determined to be asymptomatic cases.

Local authorities were quick to enact strict measures to prevent the spread of the virus in Urumqi, a city of about 3.5 million people.

On July 16, the Urumqi Metro announced the closure of its only operational subway line—a 26.5-kilometer line (about 16.5 miles) with 21 stations—in order to prevent the spread of the virus.

Also on July 16, Chinese state-run media reported that municipal authorities in Urumqi issued a directive mandating that local community authorities implement prevention protocols: local officials should seal off their communities and provide delivery of daily necessities to those who are sick, local public transportation should greatly be reduced, local markets and hotels should not be open for business, and travelers arriving in Urumqi should be placed under quarantine for seven days upon arrival.

After the announced closing down of communities, video posted on Chinese social media showed people rushing to local markets to buy food and other necessities.

On July 17, Chinese state-run media reported that hundreds of flights going in and out of a local airport had been canceled.

On July 19, local authorities placed Urumqi under a “wartime state,” banning all gatherings in the city and declaring that all communities would be under “seal-off management.” Local residents were forbidden to leave the city except under special circumstances, and citywide COVID-19 testing for all residents was underway.

The CCP’s mouthpiece newspaper People’s Daily, in an article published on July 18, quoted a hotel worker with the pseudonym Zheng Li. Local authorities had requisitioned the Urumqi hotel where he worked to be a quarantine site.

In the original version of the article, Zheng was quoted as saying there were over 100 people placed under quarantine at the hotel on July 13—three days before local authorities reported the first confirmed case.

People’s Daily has since deleted Zheng’s quote from the article, but the original version with the quote can still be found on Google Cache and some Chinese news sites that reposted the original article.

On July 16, the Chinese-language Epoch Times also obtained an emergency notice from one of the communities in Urumqi, showing that the virus could have spread widely in the city. It’s unclear precisely when the notice was issued.

The notice called for community officials to look for people who recently attended wedding ceremonies in three districts of Urumqi: Tianshan, Saybag, and Shuimogou. It also named three places—a theater, pub, and a ballroom—and asked for information on people who went there on July 5.

Also on July 16, a video showed a large crowd lining up outside a hospital in Urumqi waiting to be tested for the virus.

A staffer at the People’s Hospital of Xinjiang in Urumqi told the Chinese-language Epoch Times that 3,000 to 4,000 people were being tested daily for the virus.

Meanwhile, a staffer at a hotel near Zhongquan Square in Tianshan District told the Chinese-language Epoch Times that hotel patrons who wished to check out of the hotel must make travel arrangements with local officials.

The person said that there were barely any cars on the streets, and the service of the local train had been suspended.