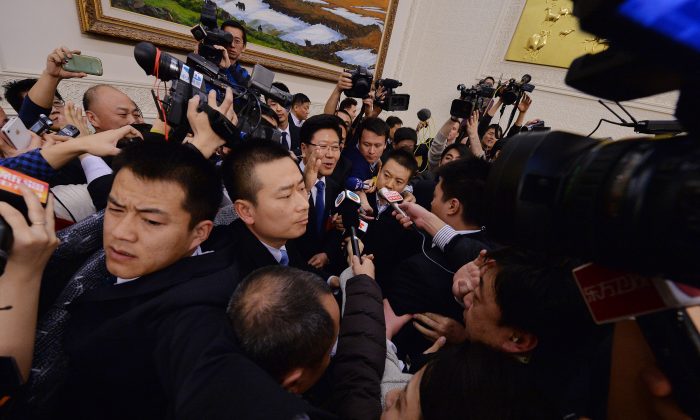 Journalists mob Xinjiang Communist Party Secretary Zhang Chunxian (center with glasses) as they try to ask questions about the recent terror attack in Kunming at the Great Hall of the People in Beijing on March 6, 2014. (Mark Ralston/AFP/Getty Images)
China

Zhang Chunxian, the Communist Party Secretary of Xinjiang, made the comments in response to media questions while giving a government work report at the National People’s Congress on March 6. The NPC is the Chinese Communist Party’s rubber-stamp legislature, currently having its annual meetings in Beijing.

“90 percent of the violent terrorist attacks by Xinjiang [separatists] are due to circumvention technologies for breaking the firewall,” he said. “They use videos on the Internet to continue organizing the attacks,” he told journalists.

“If we continue to learn advanced methods, raise awareness, and be professional, we can still press it down to the minimum.”

Many Uyghur groups and supporters, in fact, have argued that it is precisely the Communist Party’s harsh ethnic policies that led to the radicalization of Uyghurs, and the violent backlashes currently being witnesses in China.

“Violent terrorist attacks is not a result of crackdowns,” Zhang said. “It is a malignant tumor a society inevitably generates.”

Zhang’s response, as is often par for the course when Chinese officials speak in public on controversial topics of the day, was met with some ridicule on the Internet. Chinese Internet users complained that the regime was shirking its responsibility for contributing to the tensions in Xinjiang.

“Violent incidents in Xinjiang have been growing and more severe in recent years. As the top local official, he doesn’t do any self reflection, but just blames the Internet,” wrote netizen @Youyu Duleisi, on Chinese social media.

“Reporters at People’s Daily are using circumvention softwares to break the firewall. The state-run Xinhua News Agency has a Twitter account. And even [Party chief] Xi Jinping has a Facebook page. How do you deal with that?” wrote netizen @Xelloss.

Zhang’s remarks, in fact, are one of the few times that the “Great Firewall” and Internet control have been publicly recognized, and defended, by a Chinese official.

The delegation from Xinjiang, of which Zhang was a part, was the focus of media attention in China on Thursday because of the knifing rampage that took place there last Saturday. Chinese authorities declared that it was a terrorist attack conducted by eight Xinjiang separatists.

Over 200 journalists reporting on the NPC events in Beijing broke through the security cordon to question Zhang about the attack in Kunming, and related issues, as Zhang was leaving a meeting.

The scene was chaotic, with over 30 security guards trying to keep reporters away from Zhang, while some journalists yelled their questions and others fell over in the melee.

In a capping irony of the day, Zhang’s comments were soon deleted from news and social media websites by the Communist Party’s Internet censors.