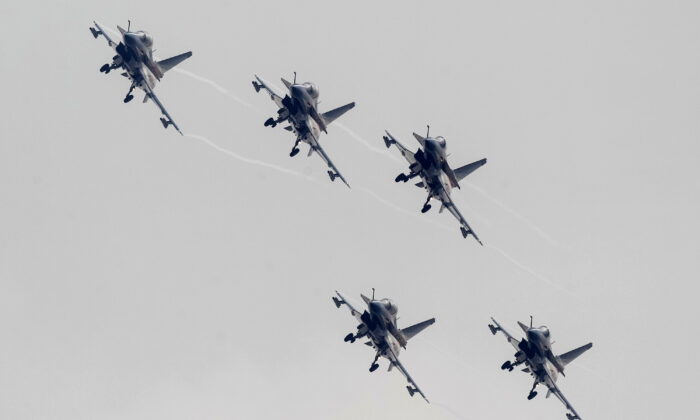 The Chinese Communist Party (CCP) has sent such incursions into Taiwan’s airspace continuously over the past two years in an apparent attempt to intimidate and exhaust Taiwan’s military.

The Feb. 24 sortie marked the 13th incursion this month, but was well off the last large-scale incursion in late January when the Chinese military sent 39 aircraft into Taiwan’s ADIZ.

The ADIZ isn’t airspace directly over the island nation, but in the immediately surrounding area where identification, location information, and government control of aircraft is required for security purposes. Taiwanese military aircraft are scrambled to respond to each such incursion.

The CCP claims that Taiwan, which has been self-governed since 1949, is a breakaway province. Chinese leader Xi Jinping has vowed to “reunify” the island with the mainland, and hasn’t ruled out the use of force in doing so.

The incident comes as Taiwan’s leadership watches the ongoing crisis in Ukraine with concern. Defense and security experts believe that the international response to that crisis could inform the CCP’s strategy for a future invasion of Taiwan.

Taiwan’s leaders have been keen to point out that Russia’s actions in Ukraine are emblematic of a greater struggle between authoritarianism and a democratic way of life.

“The people and government of Taiwan stand with Ukraine,” Taiwan Vice President Lai Ching-te wrote in a tweet. “The principle of self-determination cannot be erased by brute force.”

While Taipei hasn’t reported any unusual troop movement from the CCP, the island’s government has increased its alert level and called for increased combat readiness.

The prospect of invasion from the mainland has raised concern over the U.S. policy of so-called “strategic ambiguity,” under which it will neither openly confirm nor deny its willingness to engage in a military defense of the island. Under the 1979 Taiwan Relations Act, however, the United States is obligated to provide the island with the means to sustain its self-defense capabilities.

Meanwhile, a poll conducted by the Trafalgar Group in January found that a majority of Americans of all political affiliations support a potential U.S. military defense of Taiwan in the event of an invasion by Beijing.

In October 2021, Taiwan President Tsai Ing-wen promised that the self-governed island would defend itself and its “free and democratic way of life” from CCP aggression at all costs.