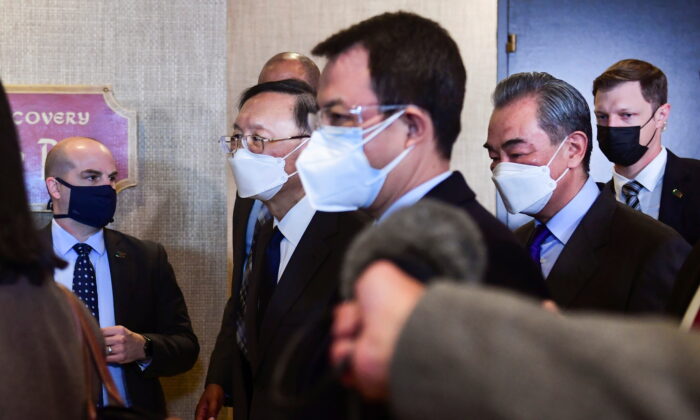 The Chinese delegation led by Yang Jiechi (2nd L), director of the Central Foreign Affairs Commission Office of the Chinese Communist Party and China's state councilor and foreign minister, Wang Yi (2nd R) depart the ballroom at the conclusion of talks between the United States and China in Anchorage, Alaska, on March 19, 2021. (Frederic J. Brown/Pool via Reuters)
US-China Relations

China’s state-controlled media are on the offensive after top Biden administration officials and their Chinese counterparts clashed during their first in-person talks in Alaska.

The two-day meeting, covering an array of issues that have strained relations between the two countries, got off to a rocky start on March 18, with Chinese officials reacting angrily to criticisms of the Chinese Communist Party’s (CCP’s) human rights abuses and economic coercion.

Lashing out over what they described as “unwarranted criticisms,” the Chinese diplomats aired bitter denunciations that veered off the usual diplomatic proceedings, extending the allotted two-minute opening remark for each speaker to a diatribe of roughly 20 minutes. With the translation, what was initially intended to be an eight-minute photo-op went on for more than an hour.

Wang Yi, China’s foreign minister and state councilor, particularly took issue with the United States’ sanctioning of 24 Chinese officials over Beijing’s clampdown on freedom in Hong Kong on the eve of the talks, saying “this is not the way one should welcome his guests.”

“The United States does not have the qualification to say that it wants to speak to China from a position of strength,” senior Chinese foreign policy official Yang Jiechi said after U.S. Secretary of State Antony Blinken, apparently taken aback, followed up with a brief speech reiterating the U.S. position.

While President Joe Biden on March 19 expressed pride in his team for how they handled the matter, mainland-controlled media have uniformly cheered on their officials’ confrontational approach, while snickering at the United States.

Zhao Lijian, a Chinese foreign ministry spokesperson, insisted at a March 19 press conference that the U.S. side “failed to keep to the set time limit and provoked disagreements first,” thus bringing a strong “smell of gunpowder and drama” to the meeting—a narrative that other Chinese media soon amplified.

Guancha, a pro-Beijing site, said that the U.S. side engaged in “double standards” by making follow-up remarks but not allowing the Chinese side the opportunity to do the same, without providing the context.

Volumes of Chinese reports compiled social media comments that spoke negatively of the U.S. delegation, such as saying that their “closed off” gestures contrasted with the “confident body language” of the Chinese side.

State-run People’s Daily promoted red posters featuring aggressive Chinese remarks from the meeting in both English and Chinese. Reference News, a news site under the state newspaper Xinhua, said the United States “made an empty show” and “exposed its lack of confidence” by visiting other allies prior to the meeting to “create pressure.”

U.S. State Department deputy spokesperson Jalina Porter told reporters on March 19 that the Biden administration is aware that Beijing’s “exaggerated diplomatic presentations in front of the media are aimed at a domestic audience.” She said the department will continue to “lay out our common interests and principles from the United States.”

Some critics, however, believe that the heated comments should wake Americans up to the fundamental differences between the two political powers.

The public blowup in Alaska is a “serious provocation,” signaling that “in the future, the CCP will no longer abide by the rules set by the United States,” said Wang He, a Chinese political affairs commentator.

The fact that the Biden administration remains eager to seek cooperation with the Chinese regime on areas such as climate change in the face of the fiery exchange plays right into the regime’s hands and would make the U.S. side lose its advantage, he wrote in a commentary for The Epoch Times.

“[The] CCP is more cunning and evil than most people can imagine. This round of talks was the CCP’s way of testing the waters, and now, it has a clear picture of the United States’ intentions,” Wang said.

Following the meeting, Chinese media have trumpeted a growing sense of assertiveness, with Sina, a Chinese news portal, declaring that “the days when China was a silent lamb are gone forever.”

“The United States had plotted a ‘Hongmen Banquet’”—referring to a historical event where a Chinese warlord invited his rival to a feast with the purpose of killing him—but instead “messed up and led to its own ‘Waterloo,’” the article stated.

“This first-round battle made a good play and is the prelude to a new stage of China-U.S. relationship,” it said.

Hu Xijin, chief editor of the nationalist state-run tabloid Global Times, said the fallout should teach the United States and its allies to be more respectful toward the regime.

“The Chinese delegation has shown the few U.S. allies how China is dealing with the U.S. China has publicly refuted the U.S., and for those U.S. lackeys who try to bite China, please behave,” he wrote in an op-ed.

The regime, following the conclusion of the meeting, has continued to assert that its affairs in Taiwan, Hong Kong, Xinjiang, and Tibet are “untouchable red lines” and that the United States should not interfere.

Gordon Chang, a U.S.-based China expert and the author of “The Coming Collapse of China,” challenged the approach of U.S. lawmakers who have so far remained supportive of maintaining good relations with Beijing.

“Policymakers say China is too big to shun. No. China is too belligerent, too dangerous, too evil to deal with. Didn’t we just see that in Alaska?” Chang wrote on Twitter on March 21.

“There is, after the Alaska Meeting, no longer any point talking to China’s regime. Beijing told us in no uncertain terms that we must accept its barbarism, aggression, and criminality. What more do we need to hear?”