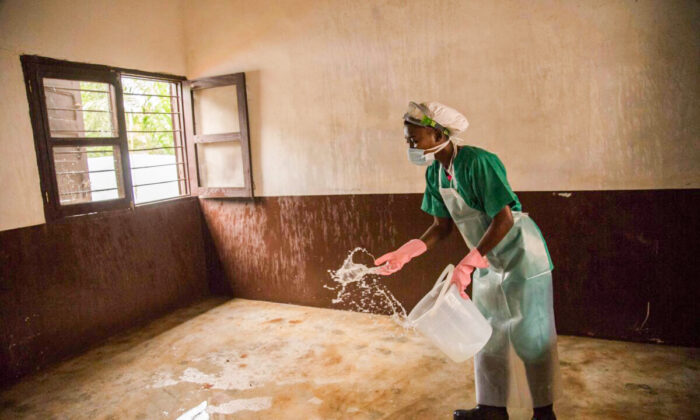 A treatment room at a monkeypox quarantine area in Zomea Kaka, in the Central African Republic, on Oct. 18, 2018. (CHARLES BOUESSEL/AFP via Getty Images)
US-China Relations

Chinese Media, Influencers Blame US for Spread of Monkeypox

Chinese state media and social media influencers in China have claimed that the monkeypox virus originated in a U.S. laboratory. They’ve also made claims that monkeypox will cause the next pandemic, even as European and U.S. scientists point out that the possibility of a pandemic is extremely small because of the close contact needed to transmit the virus.

Those scientists also said that, at present, patients are infected with a natural monkeypox virus with no links to a laboratory.

“Jimu News,” a subsidiary of state-run Hubei Daily Group, published an article on May 23 implying that monkeys that escaped from a truck involved in a traffic accident on Jan. 21 in Pennsylvania have something to do with the recent monkeypox outbreak in the United States and Europe.

The monkeys that escaped, among the 100 being transported on the truck, were recaptured the next day.

Chinese social media influencers who are supportive of China’s ruling communist regime have echoed claims similar to those made by official state media outlets.

On May 20, a blogger named “Guyan Muchan” posted a few screenshots on the Chinese social media website Weibo of a document that’s claimed to be a “monkeypox biochemical pandemic plan leaked by the United States,” implying that the U.S. government was aware of the outbreak in advance.

“Guyan Muchan” has 6.41 million followers on Weibo, and the post has been liked by more than 7,500 users and received more than 660 comments. Influenced by this post, someone even commented that the United States is “evil beyond human imagination.”

The document actually is from a hypothetical biohazard scenario published in a 2021 research report by U.S. think tank Nuclear Threat Initiative. The document is available for viewing on its website.

Major international media, such as Reuters and Bloomberg, also pointed out that “pandemic preparedness scenarios and symposiums are not proof that pandemics are planned, nor are these scenarios a new occurrence.”

Although the claim was debunked, “Guyan Muchan” has continued to spread similar assertions, blaming the United States for the spread of monkeypox.

A self-proclaimed “patriotic” cartoonist, “Sweet Potato Bear Lao Liu” also posted claims that the spread of the monkeypox virus was related to a U.S. laboratory. On May 21, he posted on his Weibo account that the United States may have modified and upgraded the monkeypox virus to develop a more virulent and transmissible variant to lead to the next pandemic.

Zhao Shengye, an internet technology blogger, claimed on his Weibo account that, after researching the monkeypox virus that appeared in Europe and the United States, he believes the probability of the monkeypox having been produced in a laboratory through virus gain-of-function research is greater than 99.9 percent. Zhao has 4 million Weibo followers.

A major mainland Chinese news portal, NetEase News, published an article on May 23, “Is the Monkeypox Virus Man-made? The United States wrote the data on the outbreak of monkeypox last year, which is terrible.” The article claims that monkeypox has more than 50 mutations, which exceeds the mutation rate of the Chinese Communist Party (CCP) virus that causes COVID-19. It also noted that no viral evolution in nature would have such a fast mutation rate.

Such claims have been refuted by international scientists.

The claims are baseless, as “there’s no evidence for monkeypox being generated in a lab,” David Robertson, head of viral genomics and bioinformatics at the University of Glasgow, told Newsweek.

“All indications are that the monkeypox outbreak involves a natural monkeypox virus,” he said.

Daniel Bausch, an infectious disease expert and president of the American Society of Tropical Medicine & Hygiene, told Axios that the risk of a monkeypox pandemic is extremely low.

“I don’t think there’s a reason for panic; I don’t think we’re going to have tens of thousands of cases,” he said.

Li Linqing contributed to the report.