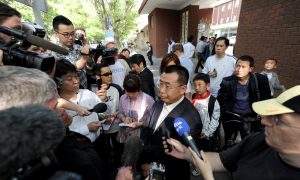 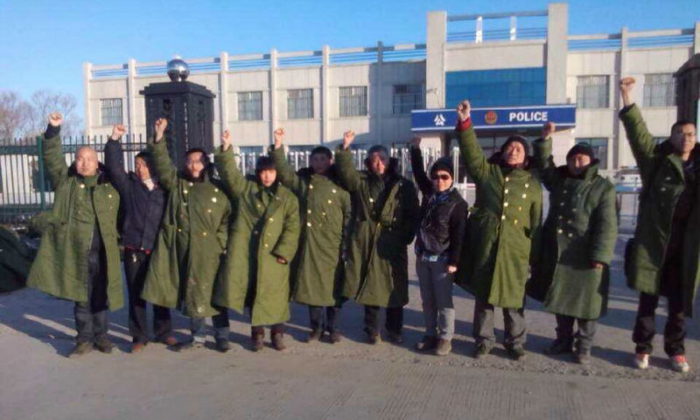 Rights lawyers involved in a nearly two-year-long court battle in Northeast China’s Heilongjiang Province tried to sue a local police chief for illegally detaining their clients, only to face absurdities that have more in common with the surreal bureaucracies of a Franz Kafka novel than justice in a society governed by rule of law.

Sui Tingfu, police chief in the Jiansanjiang agricultural reclamation area, was sued for the incarceration of adherents of Falun Gong, a spiritual practice persecuted by the Communist Party in violation of of China’s civil constitution.

Despite a May 1 judicial reform that made it easier for the common Chinese citizen to file legal complaints, the affair took a sinister twist when the lawyers filing the lawsuit had their clients’ case documents sent to none other than the extralegal agency that oversees the campaign to repress Falun Gong.

On the morning of Oct. 28, when lawyers Dong Qianyong, Ma Wei, Ren Quanniu, Xu Fugui, and Feng Yanqing travelled to the Heilongjiang Province Procuratorate to see how the case had progressed, they discovered that the documentation had been handed over to the 610 Office—an extralegal Party agency created in 1999 for the specific purpose of coordinating and executing the anti-Falun Gong campaign.

Jiansanjiang, located in Tongjiang County near the Sino-Russian border, is the site of the Qinglongshan “Legal Education Base,” a brainwashing center used for the incarceration and abuse of Falun Gong practitioners.

In order to carry out the persecution of Falun Gong, the 610 Office directs police and other security forces to break Chinese civil law, which are otherwise supposedly to uphold freedom of belief and assembly.

In March 2014, when four lawyers and seven Falun Gong clients travelled to Qinglongshan to agitate for the release of the practitioners held there, they were abducted and beaten the next day. Four practitioners have been held at the facility ever since, despite the ongoing attempts of rights lawyers to secure their release.

This May, the four practitioners—Li Guifang, Shi Mengwen, Wang Yanxin, and Meng Fanli—were illegally sentenced to prison terms ranging from two to three years each. Heavily-armed police deployed in the area had prevented the lawyers from ever reaching the court.

Since China abolished the labor camp system in 2013, so-called “black jails” such as Qinglongshan have become the facility of choice for those authorities involved in the repression of Falun Gong in recent years.

On Aug. 11, eight rights lawyers issued a joint statement detailing what they said were the gross violations of Chinese law by the authorities in Jiansanjiang, including illegal detention, beating, and rigged trials. Together with Falun Gong practitioners, the lawyers also filed a lawsuit against Sui Tingfu, the local police chief, this October.

But though the provincial authorities had received the documents by Oct. 3, lawyer Feng Yanqiang says the procuratorate has failed to review the case or conduct an investigation into the illegal activities of the 610 Office or the police.

“This criminal case filed is under the jurisdiction of the Procuratorate based on The Code of Criminal Procedure,” Feng Yanqiang, one of the lawyers, told Epoch Times. “The Procuratorate should have complied by fulfilling its duty of reviewing the case. But the Heilongjiang Procuratorate ignored its duty and transferred the case materials to the 610 Office.”

The lawyers were also informed that the Qinglongshan facility, which had been shut down last August following protests, had resumed operation in October.