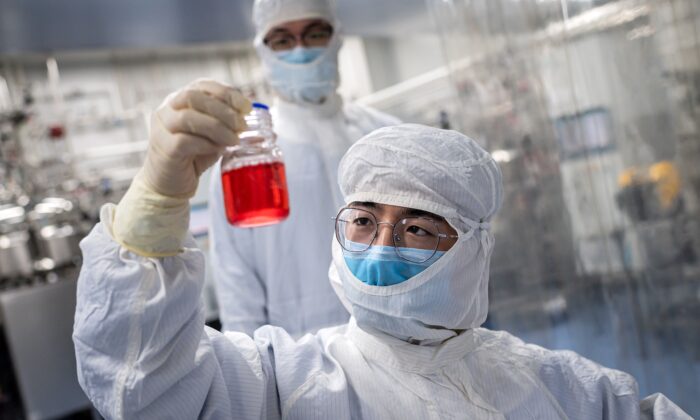 An engineer looks at monkey kidney cells as he make a test on an experimental vaccine for the COVID-19 virus inside the Cells Culture Room laboratory at the Sinovac Biotech facilities in Beijing, China, on April 29, 2020. (Nicolas Asfouri/AFP via Getty Images)
By Eva Fu

A Chinese firm’s purchase of land in Florida to build a breeding facility for lab monkeys is drawing scrutiny over the company founders’ ties to the Chinese military.

With a combined value of $5.5 million, the 10 parcels of land purchased from L & T Cattle & Timber represent one of the largest known Chinese acquisitions of U.S. land in recent years. While construction has not begun, the deal has attracted public attention at a time of heightened concern about Chinese investments in the United States over security and other risks.

The purchaser’s parent company JOINN Laboratories describes itself as a leader in non-clinical drug screening in China. According to its website, the company was founded in 1995 and employs over 1,500 staff. It has wholly-owned subsidiaries in major Chinese and U.S. cities, including Shanghai, Beijing, Hong Kong, San Francisco, and Boston.

Zhou Zhiwen and Feng Yuxia, the couple who founded and control JOINN Laboratories, both graduated from China’s Academy of Military Medical Sciences, in 1989 and 1992 respectively. The school is the Chinese military’s top medical institute, which was added to a U.S. trade blacklist last year for supplying biotechnology to the Chinese military.

After graduating, both Zhou and Feng went on to work as researchers at the academy before establishing their business venture, according to Chinese media reports. Zuo Conglin, a board member of JOINN Laboratories, also graduated from the same academy.

These links with the Chinese Communist Party (CCP) should raise red flags, according to Rep. Scott Franklin (R-Fla.).

“The idea that we would permit a … biotech firm with ties to the Chinese military to breed lab monkeys on U.S. soil is baffling, especially after China unleashed the Covid-19 pandemic on the world,” he told The Epoch Times.

“The Biden administration allowing Chinese Communist Party affiliated companies to buy up American land is unacceptable, especially for these purposes. If the President won’t put his foot down to protect American interests, Congress will.”

It’s unclear if JOINN Laboratories can proceed with its plans in Levy County. Because the purchased land is currently zoned for forestry and rural residential, the company would need to rezone the land to industrial to build its lab facility, the county said in a Sept. 22 statement.

The county said that it had been asked about a possible rezoning of the land, and that it replied that “such a request would not receive a favorable staff recommendation” because of “compatibility” issues and that it would create “spot zoning,” referring to the controversial practice of singling out a piece of land for special zoning laws different from the zoning laws around it.

County officials, when reached by The Epoch Times in early October, said it hasn’t received such a formal rezoning request from JOINN Laboratories.

The company did not publicly announce the sale and not much is known about the proposed breeding facility. JOINN Laboratories didn’t respond to an inquiry from The Epoch Times regarding the purchase and its plans for the site.

It’s unclear whether the company intends to sell the lab monkeys in the United States, China, or elsewhere. Both countries have a high demand for primates for experimental use, and the United States imports a large portion of monkeys from China.

JOINN Laboratories currently owns about 18 acres of animal testing facilities in Beijing and Suzhou, a major city in eastern China’s Jiangsu Province, according to its 2021 annual report. It is also building another primate breeding base with the capacity of raising 15,000 large animals in Wuzhou of southern China’s Guangxi Province. The quarantine station for the base is now complete, the report stated.

Chinese Deals Under the Spotlight

Around the time JOINN Laboratories inked its Florida land deal, another Chinese firm’s farmland investment near the northern border was also drawing scrutiny.

Fufeng Group, a Chinese agricultural firm, acquired 370 acres of land near the Grand Forks Air Force Base in North Dakota, where it plans to build a corn mill.

But such proximity to a sensitive U.S. military base has alarmed residents and lawmakers alike, who fear that the location could be used for foreign espionage.

Construction on the land was halted in September when the Committee on Foreign Investment in the United States (CFIUS), a federal interagency panel tasked with conducting national security reviews of foreign investments, sought more information about the project.

A local group opposing the Fufeng project is appealing to the state’s highest court to allow a public vote on the plan. The city had earlier denied a local petition that had collected over 5,300 signatures to bring the project to a referendum vote.

“There’s the danger of having this land misused for intelligence or military purposes. But put that aside, we saw what happened with COVID, when almost all this stuff was made in China, why would you want them to be involved in our own food supply in our chain supply chain here in the United States?” Desantis told the audience at Miami Dade College on Sept. 22.