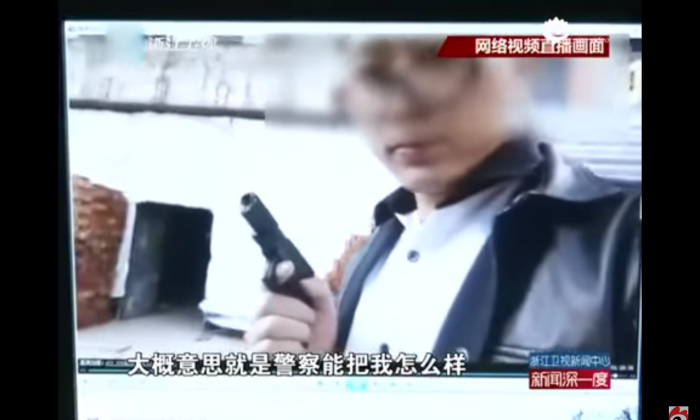 Xu Fei in his ill-concceived stunt. (via Zhejiang Weishi)
China

An internet celebrity was arrested by Chinese police during a live broadcast with 20,000 viewers when he pulled out a toy gun and began waving it about in front of a train station.

The man, Xu Fei (pseudonym), is a 32-year-old unemployed resident of Hangzhou, Zhejiang Province. He is a native of China’s northeastern rustbelt. He gets part of his income through magic stunts on D0louYuTv, a website that allows free-lance performers to find audiences.

Xu was looking at and filming military police and their parked Police Tactical Unit patrol vehicles in the broadcast when he got into trouble, Zhejiang’s Qianjiang Evening News reported on Feb. 28.

“They look so cool, unlike you,” one viewer commented live. In response, Xu drew his gun prop, purchased at a 2 yuan  ($0.30) store, shocking the audience.

“Look, I’ve got a gun too, I’ve got a gun in my hand,” Xu declared before shifting the camera back to the patrol vehicles. “Seems the police aren’t doing anything to me.”

But no sooner had Xu uttered his prematurely-spoken line, officers approached and restrained him. They brought him to a police station, and he will be held for ten days in administrative detention.

Xu was surprised and dismayed at his arrest.

“I only carried a toy gun that I bought at a 2 yuan store for my magic performance,” he told Qianjiang Evening News. “I was just trying to liven things up.”