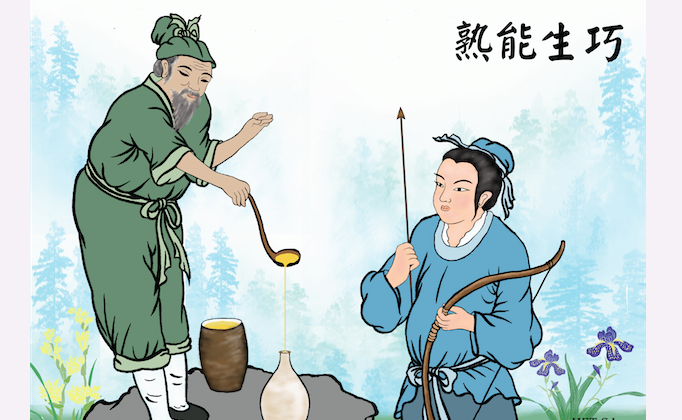 The oil peddler pours oil through a coin into a bottle while chiding the arrogant archer about how skill comes from practice. (Sandy Jean/Epoch Times)
China

The Chinese idiom 熟能生巧 (shú néng shēng qiǎo) literally means that practice gives birth to great skill. It is used to describe how skill comes from repeated practice and is similar to the English expression “practice makes perfect!”

According to the story, during the Northern Song Dynasty (A.D. 960–1127), there was a very skilled archer named Chen Yaozi. He never missed a bull’s eye and his students gave him the nickname “magic archer.” Chen was very proud of his skill and believed he was the best archer in the world.

One day, while shooting arrows, Chen attracted a large crowd of onlookers that began to cheer him on. Among the crowd, there was an old, oil peddler who just shook his head and did not seem at all impressed.

Surprised, Chen asked the oil peddler: “Can you do this?”

Chen then asked: “What do you think of my archery?”

The oil peddler answered: “It is okay, but nothing special; all it takes is practice.”

Without saying a word, the oil peddler took a bottle, placed it on the ground, and put a copper coin with a square hole in the center over the top of the bottle. He then poured oil from a wooden ladle into the bottle, without spilling a single drop on the coin.

The onlookers watched in amazement. The old oil peddler turned to Chen and said: “That was also nothing. I can do this because I have practiced it a lot. Skill comes from practice.”

With these words, the oil peddler left and the crowd became quiet.

The old peddler’s words made Chen feel very ashamed of his previous arrogant behavior. From that point on, he became more modest and practiced archery even more diligently. Soon after, he became known not only for his excellent archery skills, but also for his kind personality.

Later, people used the idiom 熟能生巧 to emphasize the importance of practice.