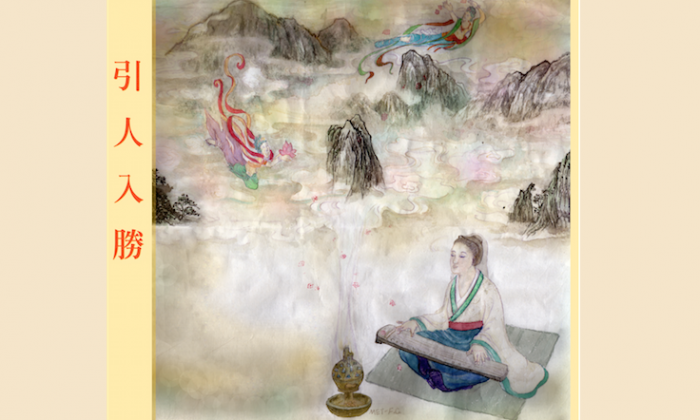 Chinese Idioms: Lead One to Enter a Beautiful Place (引人入勝)

By the end of the Eastern Jin Dynasty (A.D. 317–420), most affairs of state were entrusted to eunuchs while Emperor Ling spent much of his time with concubines and feasting.

Likewise, many top government officials were obsessed with extravagant living and gathering wealth rather than governance.

During this dark and turbulent period, many young intellectuals were quite pessimistic, as they could not see any future for themselves, believing they could be killed at any time.

Because of this, many talented young people began indulging themselves in drinking. Wang Chen was one such person.

By the age of 20, Wang Chen had earned a great reputation for his talents. His uncle, Fan Ning, who was a Confucian scholar and economist, praised Wang for being self-confident and a potentially up-and-coming personage.

Wang Chen, however, was quite disappointed with the corrupted reign and had no ambition to do anything. He indulged in drinking and was always drunk.

According to a description of this behavior in Guo Zi, a collection of short stories by Guo Chengzhi (about A.D. 403), drinking could lead Wang Chen to enter into a beautiful place or state.

The expression “lead one to enter a beautiful place” was adapted in the chapter of “Willfulness and Indulgence” in the book A New Account of the Tales of the World (1) written during the Southern and Northern Dynasties (A.D. 420–589).

The idiom 引人入勝(yǐn rén rù shèng) evolved from the story and the expression. A literal translation of the idiom is to lead one to enter a beautiful place. The idiom is used to mean something fascinating, absorbing, mesmerizing, or interesting.

The common use of the idiom today is to describe something beautiful, fascinating, or attractive, for instance, a story, a novel, a performance, a film, music, etc.

A “New Account of the Tales of the World” (世說新語) was compiled by Liu Yiqing (A.D. 403–444) during the Southern and Northern Dynasties (A.D. 420–589). It contains over 1,130 historical anecdotes and descriptive essays about hundreds of literati, musicians, and painters who lived in the 2nd through the 4th centuries.