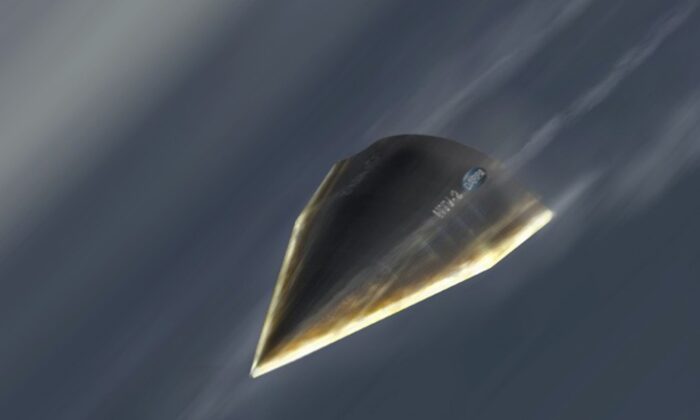 A hypersonic weapons system tested by the Chinese regime in July allegedly launched a second missile while flying at five times the speed of sound, according to a new report by the Financial Times.

It is currently unclear whether the second missile was an air-to-air weapon or a countermeasure intended to prevent the weapon from being destroyed.

Such a technology presents a potential leapfrogging of American and Russian technologies, according to experts, and could provide the Chinese Communist Party (CCP) and its military with a strategic advantage in the event of war.

“By demonstrating payload-deploying HGV [hypersonic glide vehicle] platforms, China has beat the United States in achieving the capability of near immediate strategic destruction with potentially non-nuclear weapons,” said Risk Fisher, a senior fellow at the International Assessment and Strategy Center.

A HGV is a maneuverable vehicle that is fired into space by rockets and then released to glide to its target through the atmosphere. Its ability to make sudden changes to its trajectory mid-flight makes it especially dangerous, as it is difficult for early warning systems to accurately detect.

“We just don’t know how we can defend against that technology. Neither does China, neither does Russia,” said U.S. disarmament ambassador Robert Wood in October.

The news comes less than a week after the White House announced that it would seek talks on strategic stability with China, following the first summit between President Joe Biden and CCP General Secretary Xi Jinping.

According to the Financial Times report, some Pentagon officials were surprised by the existence of such a capability, as they believed no nation had yet developed it.

Gen. John Hyten, vice chairman of the Joint Chiefs of Staff, said earlier in November, however, that the United States military researched a similar system a decade ago, but canceled the project after two failed tests because of a “brutal” bureaucracy in the Pentagon.

He also noted that in the time since that project was canceled, the United States carried out a total of nine hypersonic tests. China, meanwhile, conducted hundreds.

“Single digits versus hundreds is not a good place,” Hyten said.

Hyten also said that the hypersonic tested by China could be intended for a surprise attack on the U.S. homeland, and suggested it looked like a “first-use” nuclear weapon.

Fisher said that such a weapon, with its newly discovered ability to deliver multiple payloads while in hypersonic flight, was dangerous with or without a nuclear warhead.

“If such a strike preceded a general Chinese war to conquer Taiwan and destroy its democracy, the U.S. would be forced to choose between starting a nuclear war that would wreak far more destruction on Americans than Chinese, creating one path to Chinese Communist global hegemony, or surrendering on the Taiwan Strait, losing its alliances, and creating a second path for Chinese Communist hegemony,” Fisher added.

The tests come amid an unprecedented effort by the Chinese Communist Party to modernize and expand its nuclear arsenal. A report by the Pentagon estimated that CCP would amass 1,000 nuclear warheads by 2030.

Some experts believe that the deepening of China’s nuclear capabilities is not intended to start a nuclear war, but to give cover for conventional conflicts, such as an invasion of Taiwan. In such a scenario, they say, China’s nuclear arsenal could be used to deter the United States from entering a conflict in defense of its partners.

For Fisher, the ability of the Chinese regime to launch surprise attacks anywhere in the U.S. homeland with hypersonic weapons is a risk that the United States simply cannot survive with.

“Americans face an existential choice that has yet to be acknowledged by their leaders,” Fisher said.