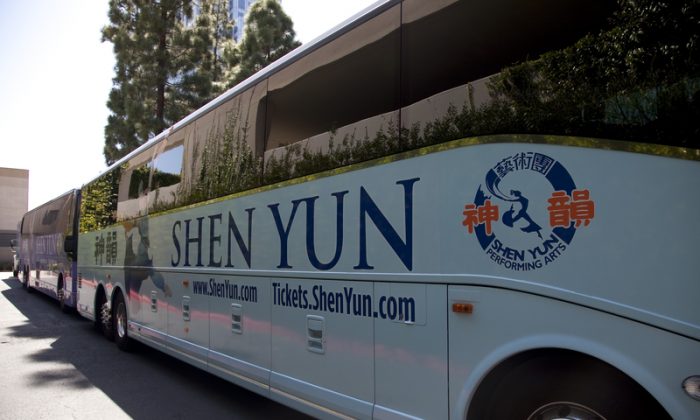 COSTA MESA—Soon after the New York-based Shen Yun Performing Arts arrived in Costa Mesa, California for a five-day run beginning on March 11, the touring companies’ buses began receiving suspicious attention, according to security guards posted to prevent the buses from being vandalized. Guarding against such threats is routine for the hosts of Shen Yun performances around the world, as the company has experienced numerous attempts by the Chinese regime to interfere with its tours.

At around 1:15 am on March 12 four security guards spotted a man who had snuck close to the buses. The security guards described the man as in his 20’s with long hair and fair to dark skin.

The man caught the security guards’ attention because he looked suspicious when he got close to the buses.

The man tried to escape after he discovered that there were people watching each end of the buses. That’s when one of the security guards, Mr. Ou, had a close encounter with the man.

“I saw a shadow pass by and I yelled, ‘Who are you? What do you want?’ But he bent his waist and walked along the bushes close to the bus,” said Mr. Ou.

Mr. Ou said he ran after the man and grabbed his arms. He then asked the man what he was there for. But the man just yelled back “Why, why.” The man also showed his fist as if he was going to have a fight with Mr. Ou. Then the man ran away quickly.

Mr. Yue, another security guard said just when he felt he was dozing off at around 5 a.m. on March 12 while guarding the busses, he saw a suspicious man walk his way.

“He looked panicked when he walked passed me,” Mr. Yue said. However, the man quickly got into a car and drove away, according to Mr. Yue.

Another security guard, Mr. Gong, said he felt like the buses had been watched since the day before. He said a red Nissan ran over the lawn of the hotel around 6 p.m. on March 11.

“It’s as if the driver weren’t watching the road and were watching us instead,” Mr. Gong said, adding that the driver quickly stepped on the accelerator and drove away, making a screeching noise.

The security guards have reason to be wary. In 2009 in Phoenix a Shen Yun tour bus had a tire blow out. On inspection, the tire was found to have had a hole drilled in it.

In January 2010 in Ottawa the front tire of a Shen Yun tour bus was found to have four deep slits cut into it, slits which could have caused the tire to fail at high speed on the highway.

In January 2013 a fuel tank of a Shen Yun tour bus was deeply gouged by three men who had loitered near the buses in Atlanta.

These incidents are believed to have been part of a pattern of harassment by the Chinese regime against Shen Yun. Leeshai Lemish, a Shen Yun emcee, documented 46 cases of the regime interfering with Shen Yun performances in 20 countries from 2008-2010. Lemish provides the evidence for regular attempts by the regime to deny Shen Yun access to venues, to interfere with ticket sales, to threaten local political officials, and other acts of interference.

Shen Yun’s mission of reviving China’s traditional culture is believed to be the reason for the regime’s efforts to suppress the show.

Zhang Tianliang, a college professor, believes the regime can’t live with the contrast between the beauty of Shen Yun’s performances and the reality of the culture the Communist Party has developed.

In a 2010 article in Epoch Times, Zhang writes, “What the regime fears most is that Shen Yun, which has swept across Europe, the Americas, Australia, and Asia, will eventually clear the clouds of deceit spread by the communist regime, and the vulgarity and ugliness of the Communist Party culture will only become more apparent.”

The U.S, Southwestern Falun Dafa Association, which is presenting Shen Yun in Costa Mesa, reported the incidents involving the individuals inexplicably coming close to the tour buses in the middle of the night to the local police.

Shen Yun has performances through March 16 in Costa Mesa’s Segerstrom Center for the Arts.