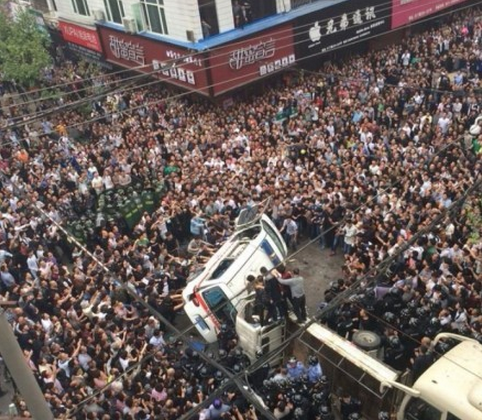 The angry crowd turns an ambulance on its side in Wenzhou City of Zhejiang Province on April 19. Over 1,000 people besieged five chengguan officers after they assaulted an onlooker. (Weibo)
China

Nearly 1,000 outraged Chinese besieged a group of urban management officials in an eastern city on Saturday, smashing their vehicle with bricks and windows, beating them bloody and unconscious, and then flipping over the ambulance that came to provide medical treatment.

It was a dramatic and violent reversal to the usual order of events when notorious urban officials, called chengguan in Chinese, get into conflicts with street vendors and pedestrians. Though their official job is to enforce local street ordinances, chengguan have gained a reputation for their arbitrary brutality across China over the years.

On April 19, a group of chengguan in Cangnan county, part of Wenzhou City in Zhejiang Province, were seen to be bullying a street vendor. A passerby, 36 year-old Mr. Huang, began taking pictures of the encounter with his cell phone. One of the officials told him to delete the pictures. He refused. A flurry of abuse, kicks, and punches followed.

The crowd saw Mr. Huang being attacked, and decided to intervene. Online rumours then rapidly proliferated that “someone was beaten to death by chengguan,” which intensified public anger and drove more people to the scene, according to the Chinese newspaper Southern Metropolis Daily.

When the chengguan attempted to hightail it out of the crowd in their van, they were surrounded. Angry onlookers deflated the van’s tires, while others smashed windows and doors with bricks, rocks, and wooden sticks. The men were dragged out of the van and beaten senseless by the mob.

Photographs posted to Chinese social media websites show chengguan lying limp and unconscious on the street in a pool of their own blood. Rocks and broken glass litter their van.

Five chengguan were hospitalized, while two went into shock due to excessive blood loss, according to a news release on the official website of the Cangnan local government.

An ambulance came to the scene to rescue the injured chengguan, but was pushed onto its side by the angry mob. Phoenix Television, a Hong Kong-based media agency, created a GIF image of the process.

More than 100 riot police were dispatched to disperse the crowds at around 4 p.m.; over 10 onlookers have been arrested in connection with the incident, according to the state-run Cangnan News.

Resentment and anger toward China’s urban management officials has smoldered among the public for years. Reports are common in China of chengguan using excessive force to implement municipal ordinances: injuries and even deaths occur periodically.

On April 9 this year, a 70 year-old man died on the street after being punched and strangled by two chengguan, according to the state run Beijing News. The senior was an onlooker who spoke up for a street vender who was in an argument with chengguan.

Last July, chengguan killed a watermelon vendor by striking him hard in the head with his own heavy metal counterweight. That took place during an argument as they were trying to make him move locations. Four chengguan were sentenced to 11, 6, 4, and 3 years in prison for “intentional assault.” A large number of Chinese netizens expressed their dissatisfaction with the result, saying the punishments were too light.

Many drew a comparison to the case of Xia Junfeng, also a street vendor, who was executed for “intentional homicide” last September after he stabbed two chengguan to death during a clash. Xia said in testimony that he was fighting for his life as the chengguan set about violently beating him.

“Such tragedies have happened again and again in recent years,” said Duan Xingyan, a user of Weibo who identified himself as a police officer. “The root reason is the severe lack of rule of law in our society.”