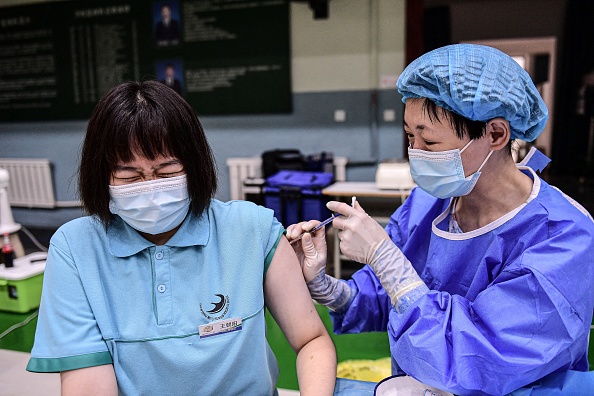 A student (L) reacts as she receives the Sinopharm COVID-19 vaccine at a high school in Shenyang in China's northeastern Liaoning Province on July 28, 2021. (STR/AFP via Getty Images)
Chinese Regime

The censoring of a woman who posted about the death of her mother after receiving a COVID-19 vaccine has recently caused a stir in China, prompting further scrutiny on the effectiveness of Chinese-made vaccines.

On Aug. 24, a woman with the handle TomoJiangJiang posted on Weibo, a Twitter-like platform, that after her mother took her first Sinopharm COVID-19 shot on Mar. 26, she developed a drug-induced rash and skin hemorrhages on Mar. 31, and eventually died on June 30.

“I really want to know the truth … We met a lot of good doctors who tried their best but couldn’t save my mother. The doctors are also very sorry and helpless!” the woman wrote in the post.

Two days later, Weibo shut down her account. The woman was also publicly reprimanded by a Weibo censor, a “supervisor” hired by the company to report on posts containing pornographic content or other information deemed harmful. With social media platforms operating under the Chinese Communist Party’s (CCP) tight censorship regime, it is common practice for firms to employ armies of human censors backed up by sophisticated censorship algorithms to police speech online.

The censor with a username ShineJiHaoYang, in a post, accused the woman of fabricating stories to gain page views. They also claimed that the woman’s mother was still alive and that the authorities had detained the woman for “causing harm to the country.”

In response, the woman opened a new account on Aug. 26 and posted a picture of her mother’s death certificate. The censor hit back the next day, writing in a post: “Laws will not allow you to use an excuse to slander our country. You should know clearly whether the vaccine is effective.”

The censor’s actions sparked a firestorm of criticism on the platform. Some users criticized the censor for reporting the woman to drive up his output. Users posted screenshots of the censor saying in a Weibo censor chat group that his performance in April was “embarrassing.” The censor’s April output showed that they failed to meet the minimum monthly quota of 500 reports, according to a screenshot.

Days later Weibo sacked the censor and shut down their account for “damaging the group reputation of Weibo censors by spreading misinformation.”

The company also said that the woman’s original account was shut down because she had “posted harmful information related to current affairs.” According to Weibo’s statement, the woman was disciplined by the platform, and not the individual censor, who only has the authority to report issues but not to close accounts.

As Beijing aggressively pushes the populace to get China-made COVID-19 vaccines, many citizens have taken to social media to recount stories of loved ones dying after getting the jab, as well as cases of leukemia, heart failure, brain hemorrhage, epilepsy, and memory loss, after vaccination.

In early August, a video circulating online showed a middle school student in eastern China’s Jiangsu Province lying unresponsive on the ground after getting vaccinated, while others conducted CPR.

For the CCP, promoting the success of Chinese-made vaccines is seen as critical to the regime’s efforts to burnish its image both domestically and around the world, experts say. And censorship has an important role to play in this.

“China has projected deep confidence in its vaccines and has used it to bolster its international reputation and the trust of the Chinese public. It is using all the means of state control and censorship to defend its vaccines and vaccine diplomacy,” Lawrence Gostin, professor of Global Health Law at Georgetown University, told The Epoch Times in an email. Gostin is also the director of the World Health Organization (WHO) Collaborating Center on National and Global Health Law.

Chunhuei Chi, director of Center for Global Health at Oregon State University, said the Sinopharm COVID-19 vaccine under-enrolled people aged 60 and older in its clinical trials. Women were also underrepresented. The WHO has also noted the Sinopharm vaccine’s limited safety data for people over 60 years old.

“WHO does not recommend people 60 and older, pregnant women, or people with underlying conditions to be vaccinated by Sinopharm’s COVID-19 vaccine,” Chi told The Epoch Times in an email.

Referring to the death of the woman’s mother, Chi said that when similar cases occur in an open society, governments would investigate them to identify if any causal relationship exists between the deaths and the vaccine. Yet, the situation is entirely different in China. “The CCP has a big face to save and maintain, which is critical to its political legitimacy,” Chi said.

He said that most people in China had no way of obtaining accurate information on the effectiveness of Chinese-made vaccines, “The CCP can continue to claim the superiority of Chinese vaccines in China without any challenges. However, it remains to be seen how effective is the CCP’s propaganda of made-in-China vaccines around the world.”

A recent study by the kingdom of Bahrain and Columbia University researchers found that the recipients of the Sinopharm vaccine had significantly higher rates of hospitalization, ICU admission, and death compared to other vaccines, especially among those aged 50 or older. The death rate of post-vaccination positive cases in the population 18 years and older is three times for Sinopharm vaccines (0.46 percent) than for Pfizer-BioNTech (0.15 percent), it found.

The preprint study was submitted to Nature Portfolio Journal on Aug. 24 and is in the process of peer review.

“China has not been transparent with data on the safety and effectiveness of its vaccines,” Gostin said. “From what we know, its vaccines are not nearly as effective as Western vaccines, especially against the Delta variant.”

China’s National Health Commission announced on Sept. 1 that as of Aug. 31, mainland Chinese provinces had received a total of two billion doses of COVID-19 vaccines. The country has yet to approve its first foreign COVID-19 vaccine.