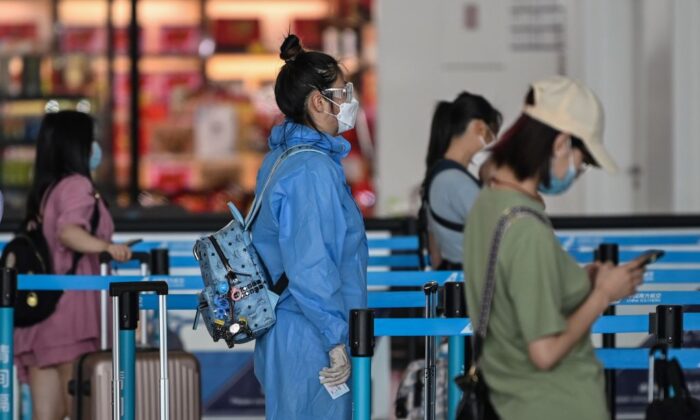 A passenger wearing protective gear and a mask waits in line at an airline counter at Tianhe airport in Wuhan, in central China's Hubei Province, on May 23, 2020. (Hector Retamal/AFP via Getty Images)
Chinese Regime

A Chinese woman surnamed Xu has filed a lawsuit against the municipal government of Wuhan, saying its mishandling of the CCP virus outbreak led to her father’s death. But a city court recently rejected her case without providing an explanation.

“It was the negligence of the government that directly led to the death of my father,” said Xu, a Wuhan resident, in a phone interview with the Chinese-language Epoch Times on July 29. Xu filed a complaint with a local court on July 20.

She elaborated that if the municipal government had accurately informed the public about the outbreak at that time, she and other locals would have taken measures to protect themselves.

Xu is seeking compensation of 1.8 million yuan (about $258,000) from the municipal government for her financial loss, mental trauma, and her father’s medical expenses.

Three days after the interview, on the morning of Aug. 1, Xu sent a text message to The Epoch Times saying that she received a phone call from the Wuhan Intermediate People’s Court informing her that her lawsuit was rejected, and that the complaint would be sent back to her.

Xu is not the first Chinese citizen to file a lawsuit seeking compensation from Chinese authorities, nor is she the first one to have her complaint rejected.

Public grievances are viewed by the Chinese Communist Party (CCP) as potential threats to its rule. Back in 2008, for example, Chinese officials harassed and silenced parents who sought compensation for their children who consumed infant formula tainted with melamine, a toxic chemical.

“At that time, we didn’t know that the virus could be transmitted between people. We learned from the local media that there was an infectious disease spreading locally. We did not know exactly what the disease was,” Xu said.

She added: “We did hear that the disease was a form of pneumonia. But a few days later, the city government disputed that it was pneumonia.”

Because of what the city government said, she and her family did not take her father’s illness seriously, Xu said.

During the early stages of the outbreak, authorities went to great lengths to conceal the spread of the CCP (Chinese Communist Party) virus, commonly known as the novel coronavirus. Local police silenced eight whistleblower doctors, among them ophthalmologist Li Wenliang, for posting on Chinese social media about a new form of pneumonia in late December.

On Jan. 11, the Wuhan Health Commission reported on its website that it had “not found clear evidence of human-to-human transmission” in the new virus.

It was not until Jan. 20 that Beijing publicly acknowledged the CCP virus was contagious.

Xu said that her father’s condition worsened after he spent a week at a local hospital getting intravenous therapy. On Jan. 25, her father began to have a fever. A CT scan revealed that both of his lungs were seriously infected. He tested positive for the virus on Jan. 27.

She explained that she repeatedly called China’s emergency number but not a single hospital would take her father in. Her father was eventually admitted to the Guanggu branch of the Third Hospital of Wuhan on Jan. 29 and was immediately hospitalized in the intensive-care unit.

Xu lamented that she was not at her father’s side when he died and said he was healthy before he was infected with the virus. She added that the two were very close.

Xu said that she suspected her father contracted the virus at the first hospital where he was treated for flu-like symptoms. She recalled that he was not wearing a mask at the time.

The Epoch Times was unable to reach Xu after receiving her text message.

Xu obtained legal assistance from the “COVID-19 Compensation Legal Advisory Group,” a consultancy group formed by two dozen lawyers and rights advocates in China and Chinese dissidents in the United States back in March. The group offers legal advice for victims in China who seek compensation and redress from Chinese authorities in connection to the outbreak.

“Xu got a call yesterday [July 31] from the court, saying that her complaint materials would be sent back to her. The court said that her case did not meet the legal requirement and did not provide any more explanation,” Yang said.

He added that the fact that the court failed to issue a formal document announcing its decision was completely against the law.

When asked about why Xu was unreachable, Yang explained: “She must be subjected to some sort of threat. Before, she told me that local community [officials] showed up at her home.”

After civil servant Tan Jun delivered the first known COVID-19 lawsuit, another Wuhan citizen, Zhang Hai, filed a lawsuit on June 10, alleging that the government caused his father’s death, who passed away on Feb. 1.

On Jan. 17, Zhang drove his father back to Wuhan for hospital treatment, after the latter suffered a bone fracture in southern China’s Shenzhen city. Zhang’s father was admitted into the General Hospital of Central Theater Command in Wuhan and had a surgery.

Though the operation was successful, Zhang said his father developed a fever and tested positive for the virus on Jan. 30. His father passed away on Feb. 1.

Zhang said he wouldn’t have driven his father back to Wuhan if he had known that the outbreak in Wuhan was so severe.

He sued the Wuhan city government, Hubei provincial government, and the hospital for compensation of 2 million yuan (about $286,730).

Zhang sent his complaint to the Wuhan Intermediate People’s Court on June 10, but the court rejected his case a week later—also without giving an explanation or issuing a formal document about the court’s decision.

Speaking to The Epoch Times, Zhang questioned the court’s decision to reject his case since he had documented evidence of the government’s negligence, he said.

He added that his case seems to have put pressure on the government; this was evidenced by authorities deciding to block his accounts on Weibo, China’s equivalent of Twitter.

He added that he planned to lodge his case at a higher court. He concluded: “However they try to silence me, I am determined to hold them accountable.”