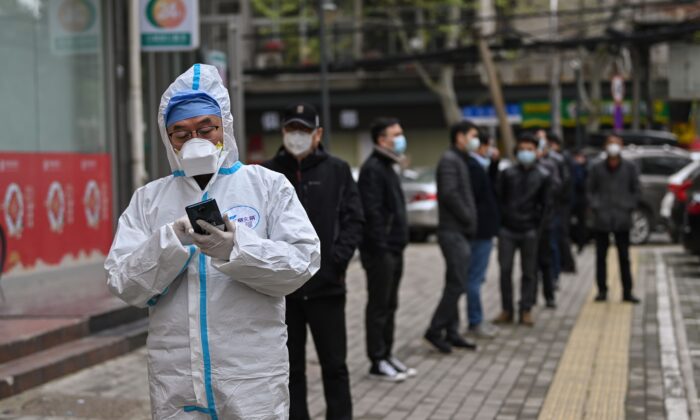 People wait to be tested for the CCP virus in Wuhan, China's central Hubei province on March 30, 2020. (Hector Retamal/AFP via Getty Images)
INSIDE CHINA

Chinese regime authorities locked down a county in Henan Province to curb the spread of the CCP virus starting from April 1—the first time Chinese officials placed an area under quarantine after the regime announced that lockdowns would be lifted nationwide.

The Chinese regime announced in March that the lockdown in Wuhan city would be lifted on April 8. But rail services and subways already started to operate at the end of March.

Officials said that all residential compounds and villages in Jia County, located near Henan’s Pingdingshan city, are now on lockdown. Residents cannot go out, even if they have been confirmed not to have the Chinese Communist Party (CCP) virus, which causes COVID-19.

Only those who have an entry pass issued by local authorities can leave their homes.

According to an official announcement displayed in a video, the Jia County CCP Virus Epidemic Command Center said that on April 1, 2020, all businesses other than supermarkets, hospitals, gas stations, drug stores, and hotels need to be closed. People need a government-ordered pass to enter and exit communities in Jia County.

It came several days after a woman was diagnosed with COVID-19 in Henan and was reportedly infected by a medical worker who has the virus. Two of his colleagues also were deemed as being asymptomatic carriers, and one of them had visited Wuhan, although CCP officials didn’t say when.

Chinese health officials have expressed concern that asymptomatic carriers of the CCP virus could be spreading throughout the country.

“My team tested some patients who had no symptoms for three weeks, but the virus was found in their blood,” said Zhang Wenhong, who is the head clinical expert team in Shanghai, late last week. “The asymptomatic carriers are the biggest risks [of a new outbreak].”

Zhang warned that if authorities don’t take action now, a future outbreak may occur in China.

“Our doctors will be very busy for a long period of time in the future. An asymptomatic carrier may spread the virus to the community at any time,” he remarked.

Chinese officials don’t count asymptomatic carriers of the virus as confirmed COVID-19 patients, but have asked them to stay quarantined if a positive test comes back.

Chinese epidemiologist expert Zhong Nanshan, however, claimed on state-run mouthpiece CCTV on March 29 that “China doesn’t have a large number of asymptomatic carriers” and downplayed fears that another outbreak could occur.