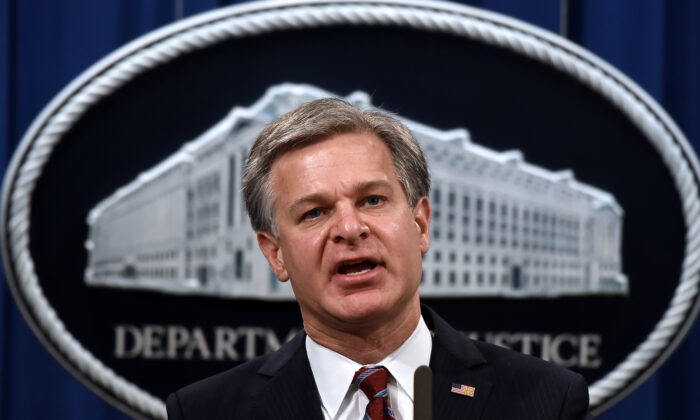 FBI Director Christopher Wray during a press conference at the Department of Justice on Sept. 22, 2020. (OLIVIER DOULIERY/POOL/AFP via Getty Images)
International Relations

Leaders from the UK and U.S. domestic intelligence agencies delivered a rare joint statement on July 6, warning that the Chinese Communist Party (CCP) is the greatest threat to the international order.

“The most game-changing challenge we face comes from the Chinese Communist Party,” MI5 Director General Ken McCallum said. “It’s covertly applying pressure across the globe. This might feel abstract. But it’s real and it’s pressing. We need to talk about it. We need to act.”

McCallum described the CCP’s aggression as a “massive shared challenge” for the UK and the United States. He said the communist regime is organizing the whole of China’s state apparatus to systematically undermine the West and steal advanced technologies.

“The CCP adopts a whole-of-state approach in which businesses and individuals are forced by law to cooperate with the Party,” he said. “In our free societies, we can do better. By building trusted partnerships across our national systems and, as symbolized today, internationally.”

CCP Is the ‘Biggest Long-Term Threat’

FBI Director Christopher Wray said the greatest challenge to the international order is the CCP, which seeks to undermine the United States, its allies, and its partners.

“We consistently see that it’s the Chinese government that poses the biggest long-term threat to our economic and national security, and by ‘our,’ I mean both of our nations, along with our allies in Europe and elsewhere,” he said.

McCallum said the purpose of the statement wasn’t to demonize the Chinese people nor to cut off China’s businesses from the rest of the world, but that it was designed to specifically address the many threats posed by the CCP. These included covert theft, forced technology transfers, research exploitation, and cyberattacks that target virtually every sector of society.

“The scale of ambition is huge,” he said. “And it’s not really a secret. Any number of public strategic plans, such as Made in China 2025, show the intent plainly.

“[They are] seeking to bend our economy, our society, our attitudes to suit the Chinese Communist Party’s interests. To set standards and norms that would enable it to dominate the international order. This should make us sit up and notice.”

The UK government, like others throughout the world, has been the target of high-profile espionage campaigns by the CCP. Earlier this year, MI5 warned that a Chinese spy had cultivated extensive ties throughout parliament, including through fundraising. Likewise, the UK also expelled several Chinese spies who posed as journalists.

The incidents served to underscore what McCallum presented as a harsh truth: that the West’s economic liberalism had failed to result in greater freedom and transparency in China.

“The widespread Western assumption that growing prosperity within China and increasing connectivity with the West would automatically lead to greater political freedom has, I’m afraid, been shown to be plain wrong,” he said. “But the Chinese Communist Party is interested in our democratic, media, and legal systems. Not to emulate them, sadly, but to use them for its gain.”

Wray noted that CCP espionage targeted all sectors of the economy, from aviation to agriculture, and that the CCP was engaged in aggressive activities against U.S. infrastructure, such as a massive hack that compromised roughly 100,000 servers last year, which Microsoft alleged was carried out by hackers with backing from Beijing.

He also noted that the CCP appeared to be preparing its economy for increased decoupling from the West in a potential signal that it could be prepping for an invasion of Taiwan.

“We’ve seen China looking for ways to insulate their economy against potential sanctions, trying to cushion themselves from harm if they do anything to draw the ire of the international behavior,” Wray said. “In our world, we call that kind of behavior a clue.”

As such, he encouraged business leaders to coordinate with the FBI and MI5 to protect themselves and to better prepare for the reality of increased CCP attempts to steal from, extort, and pressure businesses in the United States and the UK.

Wray said such a threat shouldn’t be underestimated, as the CCP had already attempted to directly interfere in U.S. elections by plotting against a Chinese-born candidate for Congress.

The statement referenced the case of Yan Xiong, a U.S. Army veteran who was targeted by the CCP last year. The incident was one of the numerous attempts by the regime in Beijing to stalk, intimidate, harass, or otherwise silence dissidents of the regime living in the United States.

Despite those threats, the Department of Justice terminated the Trump-era China Initiative, its sweeping counter-espionage campaign, in February. The department stated that it had received numerous complaints of racial profiling and, although an internal review found no evidence of such, it would end the program to avoid a “harmful perception of bias.”

Perhaps to avoid a similar outcome with ongoing FBI efforts, Wray underscored that the threat to the West wasn’t those of Chinese origin, but the CCP itself.