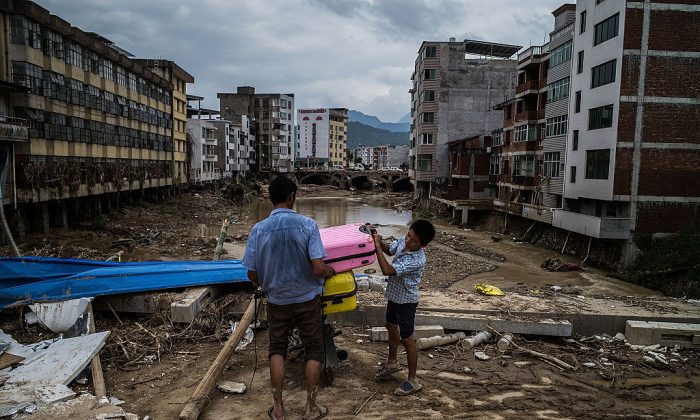 When Typhoon Nepartak tore through He Zhangze’s coastal hometown of Xiamen, the 18-year-old college student decided to have a closer look at the disaster-affected regions.

Neither the police nor the Chinese state-controlled media took kindly to his investigative adventure, though. He posted his findings, which included reports of dead bodies littering the streets, to social media on July 18; three days later, the state news mouthpiece Xinhua reported that he had been detained by the local police in Fujian Province.

He’s report, posted to popular social media and new sites Weibo and Sina, was removed by censors before long, but local eyewitness accounts and reporting by a human rights NGO confirms that the havoc wreaked by Nepartak—and hushed up by Xinhua—is real.

Initially, He had wanted to travel upstream to the reservoirs to investigate but had to abandon his plan because of tight security, according to a report by the NGO Human Rights in China. The report said that He had discovered that many people drowned when reservoirs in Mingqing County were filled to capacity and flooded.

Xinhua, meanwhile, maintains that He’s findings are merely based on rumors spread by locals with ulterior motives, and that in particular the supposed deaths were “nothing but fake.”

The Chinese regime imposes draconian censorship on online discussion; in the media, there is talk of a “maximum quota” for the number of reported deaths in accidents and natural disasters. In 2013, a woman surnamed Zhao was detained for posting questions online about details in a murder case.

Earlier during the typhoon, New York-based New Tang Dynasty Television, made phone calls to villagers in Bandong, a township in Minqqing County, enquiring about the result of reservoir discharge.

“There are two or three reservoirs here,” said Mr. Liu, a store owner. “There wasn’t any prior announcement about the discharge before it happened.”

“I know that there are are at least 200 deaths in Bandong alone,” said Ms. Xu, another resident.

But as of July 17, Chinese state media reported that the death toll in Mingqing stood at 73.

It was not the first time that He Zhangze had a run-in with the authorities. According to the report by Human Rights in China, He had refused to write “50-cent party” posts to spin public opinion in favor of the communist regime, and on another occasion organized a group of 300 students to quit the Communist Youth League, a youth organization boasting tens of millions of members that acts as an arm of the Communist Party.

According to Human Rights in China, local police had wanted to give He a lighter punishment and let him off with a warning on account of his age, but this was vetoed by officers from the provincial-level Public Security Bureau.

The report says that staff at the school He attends revoked his secretarial position and has given up on “grooming” him to be a “patriotic Party member.”