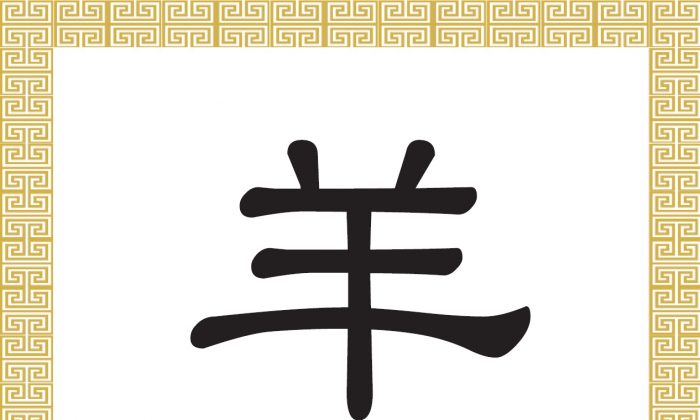 The character depicts the head of the animal, with its two horns at the top as a dominant feature.
China

In Chinese, the same character 羊 (yáng) is used to refer to both the sheep and the goat. The character is a pictogram that depicts the head of the animal, with its two horns at the top as a dominant feature. The horizontal stroke below the horns depicts the ears, while the rest of the character represents the face.

羊 is a symbol of auspiciousness and good luck due to its many benefits to humankind. Its meat and milk are highly nutritious, and its wool makes fabric that is lightweight, soft, and warm. In ancient times, when a hunter brought home a 羊 (yáng), it was considered an auspicious omen.

羊 also symbolizes peace, as they are a calm, docile, and gentle animal. Even when they do fight occasionally, they will mainly bump against each other’s horns to test each other’s strength.

In honour of the sheep, which is white, precious white jade is called 羊脂玉 (yáng zhī yù), or “sheep suet jade.”

The phrase 羊落虎口 (yáng luò hǔ kǒu), or “a sheep fallen into a tiger’s mouth,” describes a situation of hopeless peril, while 羊羔美酒 (yáng gāo mě jiǔ) describes a meal of “cooked mutton and good wine.”