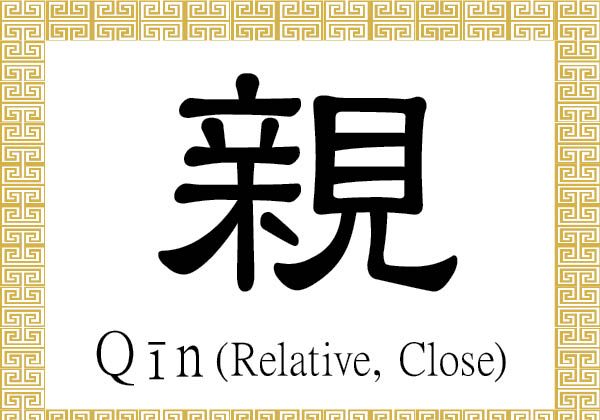 The Chinese character 親 (qīn) as a noun refers to a parent, relative, or blood relation. As an adjective, it conveys the meanings of being close, dear, and intimate. (Epoch Times)
China

The Chinese character 親 (qīn) as a noun refers to a parent, relative, or blood relation. As an adjective, it conveys the meanings of being close, dear, and intimate.

In the early bell-cauldron inscription, the character 親 consisted of two parts. On the left, the character 辛 (xīn) carried the general meaning of suffering in incarceration. On the right, the radical and character 見 (jiàn) means to see or to visit.

Together, the two parts indicated the original meaning of 親 (qīn): to visit family members who were suffering for crimes they had committed.

In the later bell-cauldron inscription, the character for wood, 木 (mù), was added to 辛 (xīn) on the left to represent the wooden cangue, or punishment collar, bringing 親 (qīn) to its current configuration.

The most common use of the character 親 is as an adjective to describe a level of closeness and intimacy. Some examples of character combinations indicating close ties or blood relationships include 親人 (qīn rén), kin or close family member(s); 父親 (fù qin), father, or literally “father dear”; 母親 (mǔ qin), mother, or literally “mother dear”; and 親近 (qīn jìn), very close (in terms of relationship).

The character 親 is also used in the term that stands for arranged political marriage, 和親 (hé qīn), which roughly translates as “relationship for peace or harmony.”

In the famous writing by Zhuge Liang (諸葛亮) (A.D. 181–234), “The First Memorial to the King Before Setting Off for War,” the political adviser and military strategist of the Eastern Han Dynasty (A.D. 25–220) and Three Kingdoms Period (A.D. 220–280) gave a valuable piece of advice about governance to a young king.

In this saying, 賢臣 (xián chén) indicates a minister or official (臣, chén) who is virtuous, worthy, and capable (賢, xián); 遠 (yuǎn) refers to “far”; and 小人 (xiǎo rén) literally means “a small person,” referring to a bad person.

As a pronoun, 親 means to refer to oneself, as in 親自 (qīn zì), personally, or in person; 親口 (qīn kǒu), from one’s own mouth; and 親歷 (qīn lì), one’s own personal experience.

As a verb, the character 親 means to kiss, which is an intimate act.