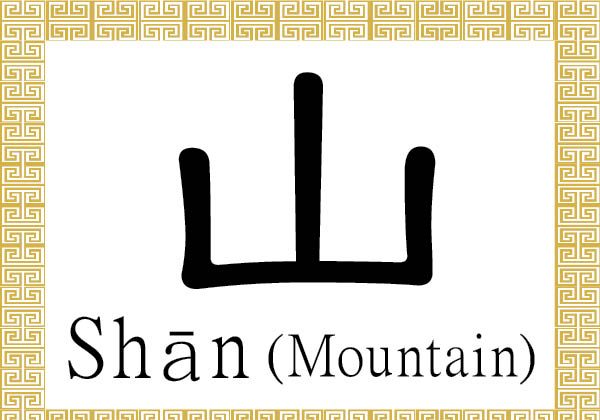 The Chinese character 山 (shān) refers to a mountain, mountain range, or hill. It is a pictograph that depicts a series of mountain peaks. (Epoch Times)
China

The Chinese character 山 (shān) refers to a mountain, mountain range, or hill. It can also mean a grave or mound.

山 (shān) is a pictograph depicting a series of mountain peaks.

The centre stroke is slightly taller than the two strokes on either side, conveying the idea that mountain peaks are of different heights. The bottom horizontal stroke represents the ground.

A landscape painting is called 山水畫 (shān shuǐ huà)—a painting (畫, huà) that depicts mountains as well as water (水, shuǐ), referring to rivers and other bodies of water.

開門見山 (kāi mén jiàn shān) is a metaphor that likens speaking or writing in a completely straightforward manner to opening the door (開門, kāi mén) and being able to plainly see the mountain (見山, jiàn shān).

山包海容 (shān bāo hǎi róng) describes a level of tolerance and broadmindedness so immense that it can be contained (包, bāo; 容, róng) only by a mountain or sea.

Yu Gong, nearing 90 years old in the story, gathers help from his son and grandson in a determined effort to remove two mountains located in front of their house so that they can travel without having to go around the mountains.

He believed the effort would undoubtedly succeed in the end, even after his death, as long as his descendants persevered.

The gods were so moved that they sent two deities of herculean strength to move the mountains to other locations, fulfilling Yu Gong’s wish.

The story encourages people that as long as they have faith and confidence, do not fear hardship, and are willing to persevere, they will eventually achieve their goals no matter how difficult.